Kolkata Knight Riders became the 3rd team to confirm their spot in the IPL 2018 playoffs.

The Knight Riders cruised into the playoffs with their 3rd consecutive win as they defeated the Sunrisers Hyderabad in their backyard with a convincing 5-wicket margin. The home side was looking good to post a 200+ total as they were placed at 127/1 in the 13th over before KKR bowlers pulled things back. The visitors kicked off the 173-run chase by scoring 53 runs in the first four overs. The start helped KKR ensure that there was no panic chasing against the Sunrisers who are quite good in defending totals.

Prasidh Krishna has become a crucial player for the Kolkata Knight Riders since he made his debut against MI and has delivered when needed. His overs at the death were key in killing the momentum from the Sunrisers’ innings as he bagged a 4-wicket haul including the wickets of Shikhar Dhawan and Manish Pandey.

Prasidh’s figures of 4/30 helped him to earn a match value of 85 lakhs as per the CricTracker’s Player Value Algorithm. He was the Most Valuable Player of the game and his match value is over four times his base price of 20 lakhs the amount he was roped in for by KKR. Earlier in the day, Prasidh’s Karnataka-mate Shreyas Gopal returned with similar numbers against RCB. Yusuf Pathan was the unfortunate one to be Liable Players of the game as he scored only two runs on comeback after being rested in the previous couple of matches. Shikhar Dhawan was SRH’s Most Valuable Player for scoring a fifty which was valued at 53.5 lakhs. Dhawan’s batting partners Shreevats Goswami and Kane Williamson composed 30s which were valued at 43 and 39.5 lakhs respectively. 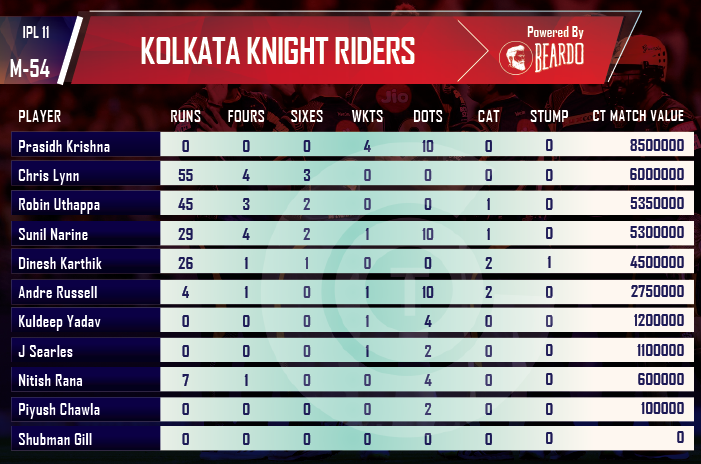 Chris Lynn once again played an anchor role as he negotiated successfully the home team’s plans of attacking him with spinners. He scored 55 off 43 balls with four fours and three sixes which earned him a match value of 60 lakhs. Robin Uthappa and Sunil Narine made crucial contributions in the chase along with Lynn to get them over the line.

Their match performances were valued at 53.5 and 53 lakhs respectively. Shubman Gill once again failed to gain any value as he didn’t get a chance to face a delivery and the ball didn’t pop up to him while fielding either.