Mumbai have to win here to have a qualification chance while DD have an opportunity to spoil their party.

With Royal Challengers Bangalore‘s (RCB) defeat against Rajasthan Royals (RR) earlier this evening, Mumbai Indians are just a victory away from making it to the playoffs and they don’t have to worry about the net run rate scenario at all. RCB was the only team which was close to Mumbai in terms of NRR and with them being eliminated now; it’s only a matter of reaching the 14 points for the reigning champions.

For Delhi Daredevils, their fate was sealed long back. They will end up at the bottommost position of the points table as they have only 8 points in their kitty. However what Shreyas Iyer & Co. also know is that they can be the party spoilers for Mumbai if they beat them tomorrow and they will be really motivated to do that.

The Feroz Shah Kotla pitch yesterday for the CSK-Delhi game was low and slow and it kept getting slower and slower as the game went on. The fact that there was hardly any dew didn’t help the team batting second and a score in excess of 160 proved to be well above par.

It will be a tricky decision for the captains at the toss. With dew, it will be a different ballgame in the second innings as the ball will skid onto the bat, but without dew, it will be exact opposite as the pace of the pitch will go down and strokeplay will be very difficult.

Glenn Maxwell has been horribly out of form this IPL and there have been a lot of questions about the team management’s stubbornness of persisting with him despite his failures. He played a poor shot against CSK too and the chances are pretty slim that he will feature tomorrow. Delhi might want to give a go to the young left-handed opener Manjot Kalra who scored a fantastic hundred in the final of the U19 World Cup a couple of months back.

If Maxwell is dropped for Kalra, Plunkett should come into the side to fill the overseas slot vacated and Avesh Khan will probably have to make way for him. It will be a fair call as Avesh was quite wayward with his lengths in the CSK game and conceded too many in the couple of overs he bowled.

Mumbai are consistently relying on their all-rounders to deliver 8 overs which is proving to be a big ask for them. The Pandya brothers went for 78 runs in their 8 overs against Punjab, while Ben Cutting who also had to bowl one went for 15. If not for the Jasprit Bumrah masterclass that evening, the lack of the 4th specialist bowler might have cost Mumbai the game.

Mumbai won’t want to take that risk going into this crunch encounter which is the reason why they will probably be dropping Ben Cutting to strengthen their bowling. The options in the squad for the 4th bowler’s slot are Adam Milne and Mustafizur Rahman and considering the conditions at Kotla, the latter will be the right choice as he has got a lot of variations in his repertoire.

Mumbai, if they pick that extra bowler, are a super balanced side. With Kieron Pollard getting back to form and the Pandya brothers chipping in on a regular basis, the lower order looks settled. The top order has been fairly consistent in most of the games anyway, the only little issue is the form of the skipper Rohit Sharma who has registered quite a few low scores to his name back-to-back. However, given his quality and experience, the management will back him to come good when it matters.

For Delhi, the Nepalese teenager Sandeep Lamichhane has come in as a breath of fresh air. The control and accuracy he has bowled with is remarkable and he has done so against some of the best batters in the world. Trent Boult and Amit Mishra have been there and thereabouts, while the youngsters with the bat have punched above their weight. The hosts overall possess a good enough team and if they bring out their A-game tomorrow, we might have a good contest on our hands.

The prediction is for the Mumbai Indians to beat the Delhi Daredevils in this match. 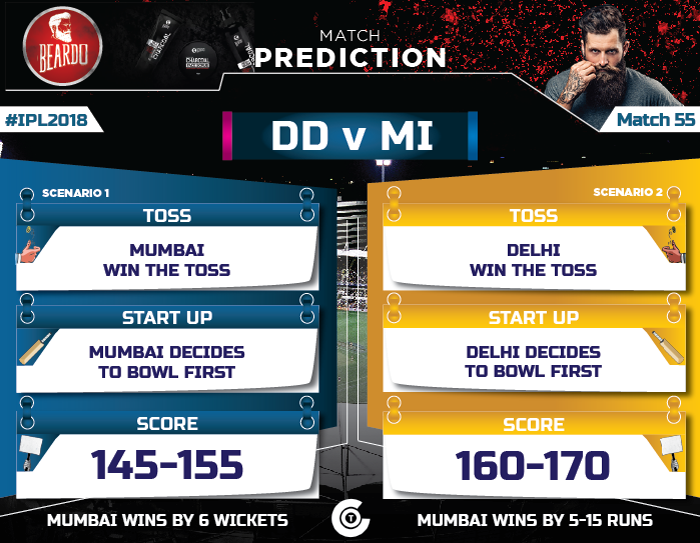