The match will be played at the Sawai Mansingh Stadium, Jaipur.

The Delhi Daredevils suffered a heavy defeat against the Kings XI Punjab in their first game of the IPL 2018. It was a day of mixed performances for the DD camp. Their batting clicked really well with Gautam Gambhir leading from the front. However, they were blown away by the attacking gameplay of the KXIP batters on the day. Now, the team has had a day off and are set to take the field again.

This will be yet another away game for the Daredevils. The Gautam Gambhir-led side is all set to take on the Rajasthan Royals at the Sawai Mansingh Stadium in Jaipur. The clash will be a match up between two sides with similar luck, or rather the lack of it.

The Delhi Daredevils can still fancy their chance in the game and pounce on the Royals, who have endured a heavier defeat in their season opener. But for that to happen, the DD think tank will have to put forth their best possible combinations forward in the match. They will certainly be making a few changes as they head in to this important clash.

In the opening slot, the Delhi Daredevils are unlikely to tinker with their combinations. Gautam Gambhir was excellent in the first game and played an anchoring role in the innings for DD. Gambhir, who has the most number of fifties in the IPL, would hope to continue on the same good form in the game against the Royals.

To partner up with Gambhir, Colin Munro looks like an ideal batsman. Munro is ranked number two in the ICC T20I batsmen rankings. He had a rare off day in the game against the Kings where he perished cheaply. He has three T20I tons to his name and would wish to leave an imprint on the IPL 2018 soon.

The Delhi camp has received a big boost in their middle-order with hard-hitting Australian batsman Glenn Maxwell joining the squad. Maxwell has been in a sublime form in the shortest format of the game and is an impact player. This will be his first game for the Daredevils, if drafted in the playing eleven. He is expected to be slotted in at the expense of Dan Christian in the playing eleven.

Along with Maxwell, the solidity in the middle-order for the DD camp will come from Shreyas Iyer and Rishabh Pant. The two young Indian batsmen were retained by the franchise prior to the auctions this year. They will be eager to justify this very move of the camp.

Iyer had a poor outing in the previous game. On the other hand, Pant had played a brisk knock showing glimpses of what is capable of doing with the willow in hand. He can up the ante in the fag end of the innings and can be a very good finisher for the side.

In the all-rounders department, the Delhi Daredevils are certain to go ahead with Chris Morris. The South African all-rounder has been a mainstay in the franchise since last couple of years. Also, in the game against the Kings, Morris had fared up decently with the bat to finish things on a high for the Daredevils’ innings.

Morris is expected to be accompanied by Vijay Shankar in the club. Vijay Shankar was promoted up the order in the previous game. However, he might not get the same lucky chance this time around in the game against Royals. But he is sure to be a starter in the pplaying eleven. The team will be hoping to extract his services in the bowling department as well.

Amit Mishra had a very bad day at office in the previous game. KL Rahul had smashed him all round the park. In the game against Royals, one could expect another veteran cricketer, Shahbaz Nadeem, replacing Mishra in the playing eleven. Nadeem has been a perennial performer in the domestic circuit.

Also, Rahul Tewatia is expected to retain his place in the playing eleven. Tewatia had a promotion in the batting order in the first game. This certainly shows that he is in the scheme of things of the team management to be a pinch hitter or a floater in the batting department.

The pace bowling department of the Delhi Daredevils had their own struggles in the first game. Neither did Mohammed Shami look at his fine best, nor did Trent Boult live up to the expectations. Despite the underpar show, both Shami and Boult are expected to retain their places in the playing eleven.

It will only be unfair to take them out of the equation after just one off game in the tournament. Boult has been in sublime form in the recent times and was very successful in the recent international assignments against England at home. On the other hand, Shami has his own points to prove amidst all the brouhaha about his personal life.

Take a look at the DD Predicted XI 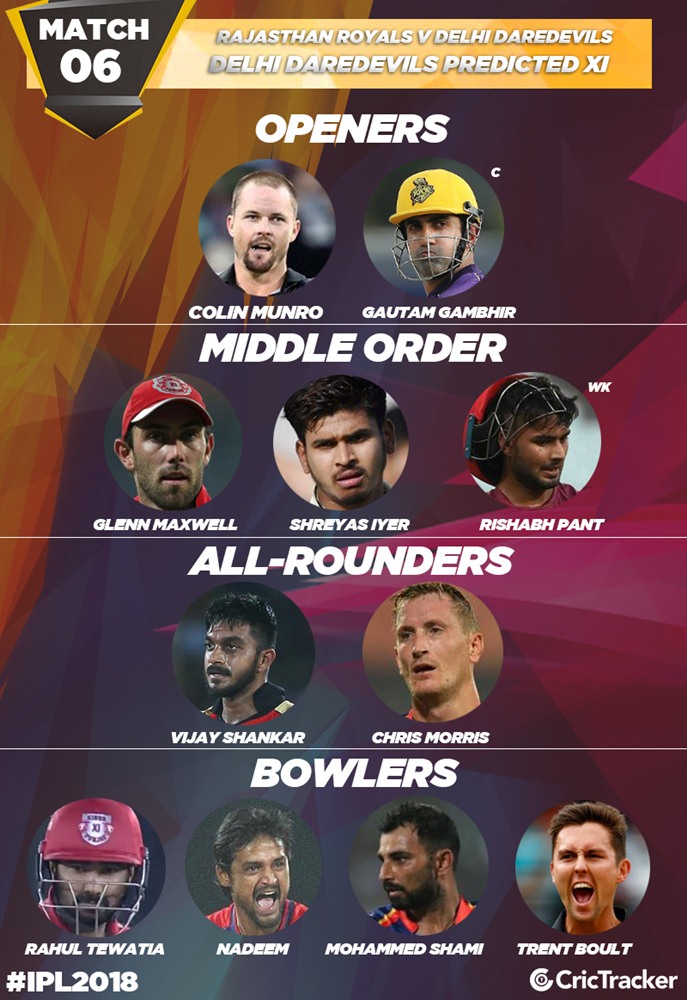