The match will be played at the Sawai Mansingh Stadium, Jaipur.

The Rajasthan Royals had a dismal start to their campaign in the 2018 edition of the IPL. They suffered a crushing 9 wicket defeat at the hands of the Sunrisers Hyderabad in their first game of the season. Now, they are set to play their first home game of 2018. The Royals will be hosting the Delhi Daredevils at the Sawai Mansingh Stadium in Jaipur. It will be night encounter and the Royals would hope to turn their fortunes in the game.

As they enter the contest, they are left with a lot of questions to answer. They will be hoping to get their combinations right in this particular game. In the first game, they sprinkled a few surprises by letting Rahul Tripathi bat in the middle order and Ajinkya Rahane chose to open with D Arcy Short. Also, they promoted K Gowtham in the batting order and let Jos Buttler bat in the lower middle order.

Whether the team addresses these highlights or continue with the same tactics, remains to be ascertained. For now, a lot of talk has been going around about the team combinations. They were jolted by an injury concern to their overseas bowler. Furthermore, Jofra Archer is reportedly still not available for selection. Amidst this backdrop, it becomes tough to figure out how the Rajasthan Royals will plan their strategies for the game against the Delhi Daredevils.

The Royals skipper Ajinkya Rahane admitted the mistakes his side committed in the first game. He is sure that his side can learn from the mistakes and come good in the matches to follow. Rahane, on the personal front, had an off day with the bat too. He will be eager to play the anchoring knock for his side against the Daredevils.

Ajinkya Rahane will be joined by D Arcy Short as the other opener. Short had a very short stay at the crease in the first game. He was run out in the very first over as well. But one can rule out the fact that he has been in a tremendous form in the recent times. He was the highest run getter in the BBL this season.

The major concern for the Royals in the first game was their middle order collapse. Albeit the middle order boasts of several big names, none save Sanju Samson lived up to the expectation. Samson played very well for his 49 on a track where all other Rajasthan Royals batters struggled.

In the coming fixtures, the camp would hope that the likes of Jos Buttler will step up and take more responsibility. The side sees Buttler as a finisher and he will have to justify the tag for the franchise. Buttler looked totally confused against the spinners in the first game. And Delhi Daredevils have a very good spinner in Amit Mishra and Shahbaz Nadeem.

The big name that has been making a lot of ripples in the tournament is Ben Stokes. Stokes had a phenomenal IPL season last year. But his first look in 2018 was only a shadow of what he has been promising to deliver. The English all-rounder would be keen to contribute to the team’s cause in the games to follow.

In the spin bowling department, the Rajasthan Royals are likely to stick around with the Karnataka duo of K Gowtham and Shreyas Gopal. Both are handy spinners who can use the long handle as well. Gowtham, in particular, is a muscle hitter of the cricket ball.

The Royals could use either of these two players as floaters in their batting lineup. But the primary role of Gopal and Gowtham would be to bowl spin in the middle overs and contain the run flow. They failed to do so in the first game and that cost the Royals dearly in the match.

The fast bowling department of the Rajasthan camp looks very experienced on paper. They have the services of Dhawal Kulkarni, who has been around in the Indian cricket circuit for a very long time. Also, he is a renowned master of the format. Kulkarni did not have a very good day against the Sunrisers.

He would be hoping to improve on the same. He is set to be accompanied by Jaydev Unadkat. Unadkat was one of the leading wicket takers in the IPL last year. In the first game this season, he was the solitary wicket-taker for his side. Unadkat is set to get another game for sure and will be leading the bowling attack for the Rajasthan Royals.

The Indian duo of Unadkat and Kulkarni will be assisted by Australian pacer Ben Laughlin. Laughlin has made sporadic appearances in the IPL. This season, if he performs well in the opportunities that come his way, he could pretty well become a regular started in the playing eleven.

Here’s RR predicted XI for the game against DD 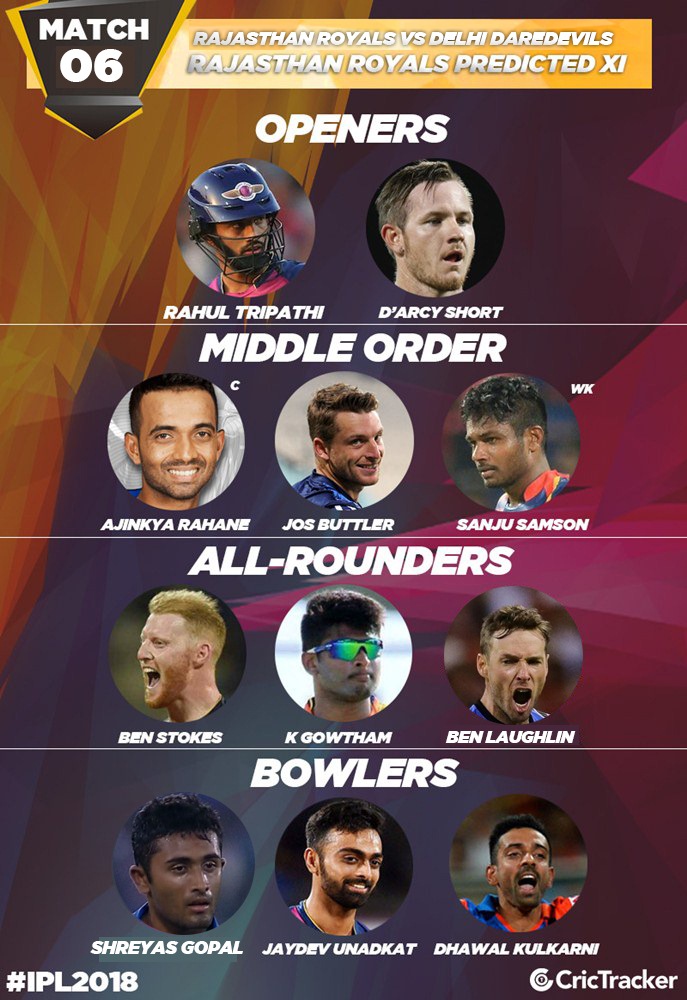