Mumbai Indians might be uncertain about their opening combination ahead of their game against SRH.

Dwayne Bravo might have snatched two points from Mumbai Indians in the opener but Rohit Sharma was glad to take away positives from the game. The three-time IPL winning skipper was quite happy about the young Ishan Kishan and Surya Kumar Yadav who stepped up after openers failed. However, Rohit will be hoping to step up in their 2nd game against Sunrisers Hyderabad who displayed the best bowling performance in the tournament so far. The depth in the SRH’s bowling attack can unsettle the youngsters and MI want their skipper to do his part.

Mumbai might be uncertain about their opening combination after the first game where they opened with Evin Lewis and Rohit Sharma. They would be tempted to go with Ishan Kishan and Lewis who are the best in utilizing the field restrictions. This meant they might be exposing a left-handed combination to Bhuvneshwar Kumar who always done well against MI team. Dropping one of the left-handers for Rohit will ensure the Mumbai franchise to have a left-hander against the left-arm spinner Shakib Al Hasan and leg-spinner Rashid Khan. 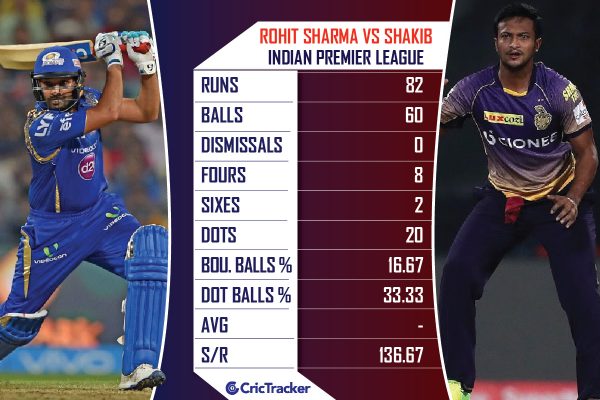 Though Rohit Sharma struggles in picking the googlies from leggies, he always did well against the Bangladesh left-handed all-rounder. The MI skipper scored 82 runs in 60 balls against Shakib without being dismissed. Shakib has only 33.33 dot balls % against Rohit who hit eight fours and two sixes against him. No other player scored 60 and more runs in the IPL against the left-arm spinner. The 82 runs are the most Rohit scored without getting dismissed in the IPL against any bowler.

Most runs scored by a player vs Shakib Al Hasan in the IPL: 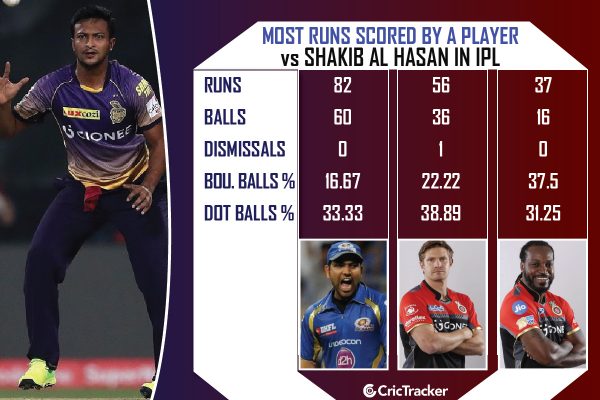 Given his recent struggles against the moving ball, pushing down Rohit Sharma won’t make difference to the Bhuvneshwar Kumar threat. The Indian limited-overs opener needs to step up in the middle overs and pick his targets. This will allow Lewis and Kishan to play their natural game and make MI off to a flyer. Rohit would also like to improve his record against SRH to hand the defending champions their first win of the season.