The Sunrisers have never won at the Wankhede against the Mumbai Indians, a stat which they'll be eager to turnaround.

The Sunrisers Hyderabad started the tournament with a bang, but in the last two games, when their bowling attack was hammered, they struggled. The other teams potentially have spotted the weakness in the team will be keen to exploit those further. Despite having a solid bowling unit, SRH’s batting department looks a bit too fragile.

VVS Laxman, Muttiah Muralitharan and Tom Moody have a lot thinking to do to sort the issues. The upcoming mid-season transfer window might involve a lot of transactions from the Orange Army’s side. This is the first time a mid-season transfer option has been awarded to the players and this might probably help SRH tick all the boxes.

Ricky Bhui was awarded his first match in the Indian Premier League (IPL) after sitting on the bench for nearly 3 seasons, but unfortunately for the youngster, he was dismissed for a duck. If Shikhar Dhawan clears the fitness test, he will be in but SRH also have to make a forced change in the team. Here’s the predicted XI for the Orange Army against the struggling Mumbai Indians.

Dhawan might be getting into the playing XI for tomorrow’s big game. The Sunrisers have never won at the Wankhede against the Mumbai Indians, a stat which they’ll be eager to turnaround. The left-hander’s presence is pivotal if they aim to break that deadlock.

Skipper Williamson played one of his finest knocks against CSK. It was a perfect blend of timing and power hitting and the way he cleared the ropes with ease was a treat to watch. Hence, he might come in to open the innings with Wriddhiman Saha slipping into the middle order.

Manish Pandey’s horrendous run in this IPL continued as he registered a duck in the previous game. The Karnataka batsman cost Rs. 11 crore for the Sunrisers and as it stands, he has been very poor. Saha should probably get to bat at number 4 or 5 as he’s best suitable for the middle overs.

Yusuf Pathan took us back in time to the good old days with a brilliant performance against the CSK. He failed to take his side over the line, but that innings should do a world of good to his confidence levels.

Deepak Hooda is another youngster who is not accumulating enough runs to consolidate his position in the playing XI. Although he played one match-winning knock against Mumbai last time around, he needs to contribute a bit more to the side. He got a golden chance to bat at number 4 last game but spilled it.

Shakib Al Hasan is showing a different version of his game with the extra responsibility he’s getting in the SRH camp. The Bangladeshi all-rounder has been terrific for the side, registering some very important cameos with the bat. He has been consistent with the ball as well and his addition is proving to be a valuable one for the Orange Army.

Bhuvneshwar who has been a key bowler for SRH will not take part in this match. He hasn’t travelled with the team and thus they will have to bring in Sandeep Sharma. The exact reason for his absence is unknown yet but this gives Sharma another chance to prove himself. He played his first match this season against Mumbai and picked a couple of wickets but once Bhuvi was fit he was once again on the bench.

Rashid Khan got hammered once again in the game against CSK, but he came pretty handy with the bat. The leggie would’ve planned his course of action with corrective measures. Siddarth Kaul showed great composure with the ball and he should be getting another game. The young bowler from Punjab has been brilliant in the death overs. Billy Stanlake was taken to the cleaners by Ambati Rayudu, but his performance wasn’t that bad. Hence, he will continue to hold his place in the team. 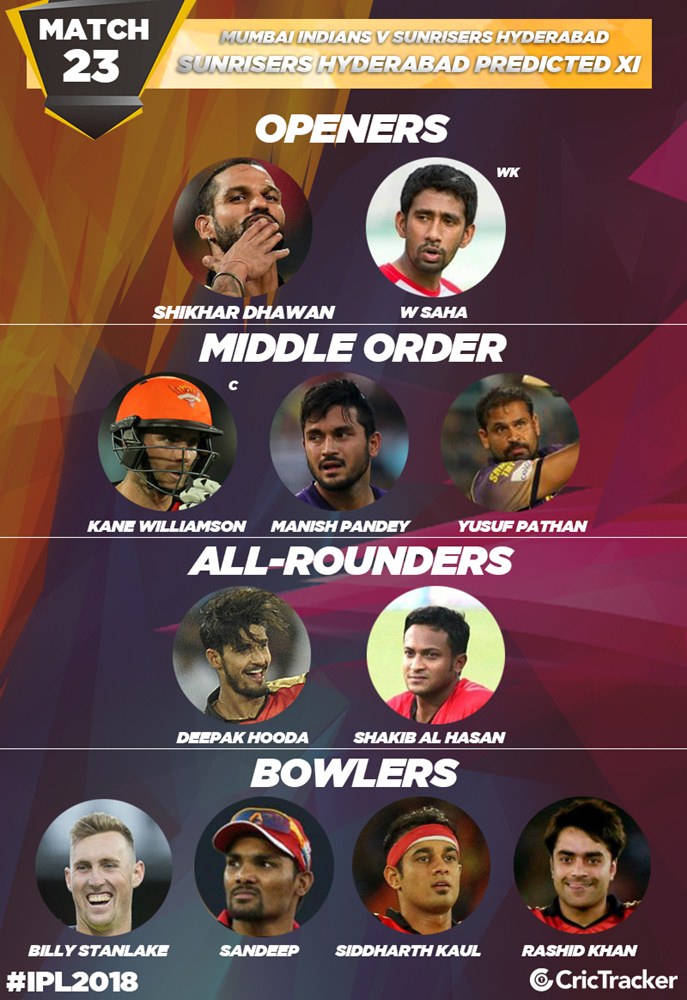