IPL 2018: Qualifier 1, CSK vs SRH – Most Valuable and Liable Player of the game

IPL 2018: Qualifier 1, CSK vs SRH – Most Valuable and Liable Player of the game

Chennai Super Kings have now made it to the finals in the seven out of the nine seasons they featured in.

The Chennai Super Kings cruised to a record 7th IPL final by pulling off a two-wicket win over the table-toppers Sunrisers Hyderabad in the first qualifier. The Men in Yellow, who started the season by chasing down 47 runs in three overs with three wickets in hand, came out on the top from a similar situation at the Wankhede again. Faf du Plessis turned out to be the hero this time as the 2-time champions needed only 13 balls to score the 43 runs they needed at the start of the 18th over.

Faf du Plessis had copped a lot of criticism for CSK’s persistence with him at the top and making Ambati Rayudu bat at No.4 who has been successful while opening this season. However, the South African skipper proved his worth by playing a blinder and took his side through to the finals. He kept his calm while CSK kept on losing the wickets at regular intervals scoring 67 off 42 balls. He was the Most Valuable Player of the game as his knock was valued at 73.5 lakhs as per the CricTracker’s Player Value Algorithm. 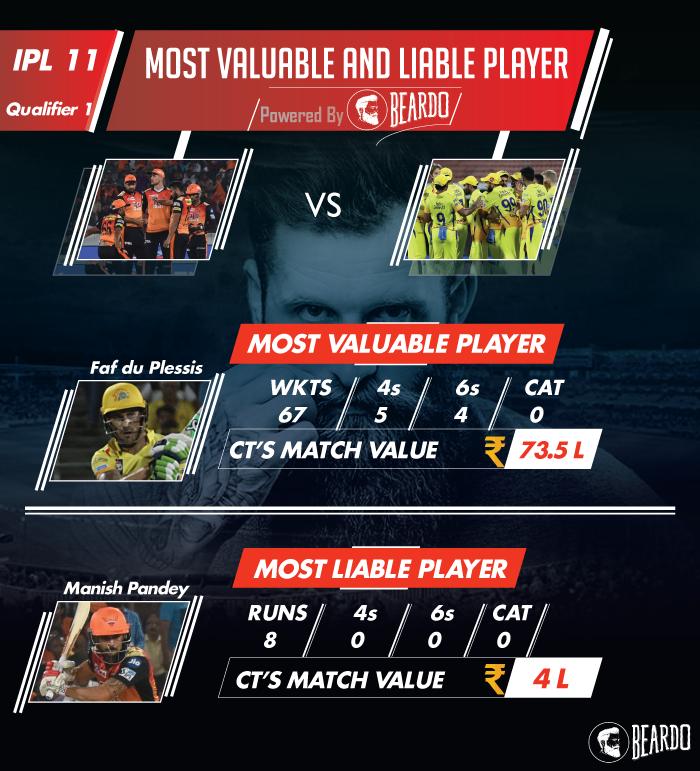 Manish Pandey was the Liable Player of the match scoring only eight runs while Shikhar Dhawan, who bagged a golden duck, escaped by the catch he took on the field. Despite conceding 20 runs in the 18th over, Carlos Brathwaite was the Most Valuable Player of SRH for his blitz that propelled his side to a competitive total. The West Indian scored an unbeaten 43 off 29 balls including four sixes which was valued at 59.75 lakhs. Rashid Khan‘s economical bowling figures of 2/11 in the four overs he bowled earned a value of 37.75 lakhs. 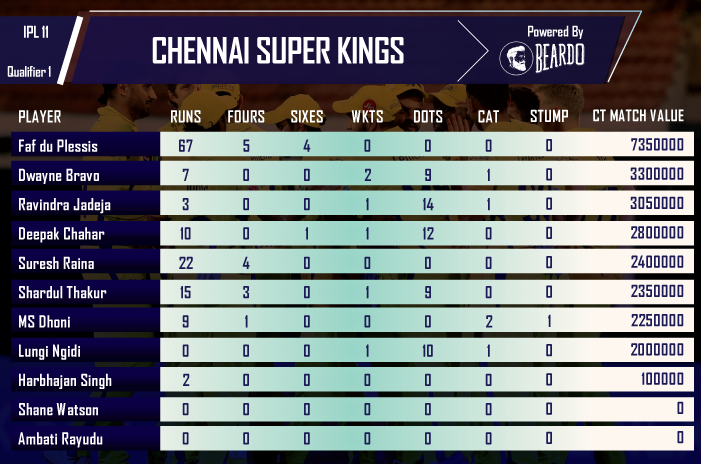 As many as three CSK players found themselves at the bottom of the charts in this game. Shane Watson and Ambati Rayudu, this season’s best batsmen bagged ducks while Harbhajan Singh wasn’t given an over to bowl. Dhoni’s decision of using Dwayne Bravo in the middle overs worked wonders for the  Chennai Super Kings as the Caribbean all-rounder took 2/25 in his four overs and earned a match value of 33 lakhs. Ravindra Jadeja’s wily spell of 1/13 was valued at 30 lakhs as per the CT’s algorithm. 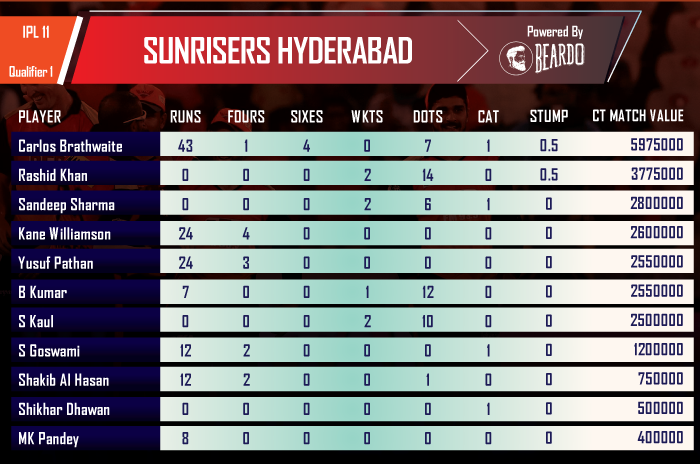