Chennai have defeated Sunrisers in their previous two meetings this season.

After a 6-week long tussle between 8 teams, we are finally into the playoffs of Indian Premier League (IPL) 11 and it’s starting tomorrow with the Chennai Super Kings taking on the Sunrisers Hyderabad at the Wankhede Stadium. Both CSK and Hyderabad finished the preliminary round with 9 wins in 14 games, but on the basis of a slightly better net run rate, the latter owned the top spot in the points table, while the former remained at no. 2.

The luxury of finishing in top 2 in the group stage of the IPL is that the teams get to play in Qualifier 1 which is effectively not an eliminator. While the winner fetches the ticket to the finale, the loser will still have the chance of making a comeback as they will play the Qualifier 2 against the winner of the Eliminator which will be played between the no. 3 and the no. 4 teams.

The Wankhede, as usual, will be a batting paradise, but the team batting first will have to be a little careful early on because of the new ball jags around for the first couple of overs at this venue.

Also, another important factor with regard to the conditions here is that the dew presents itself in a fair amount as the night goes deep and the team bowling second has a massive disadvantage. So both captains will be hoping for the coin to fall in their favour so that they can choose to bowl first.

The Sunrisers Hyderabad dropped Alex Hales the other evening against KKR and opened the batting with Shreevats Goswami and Shikhar Dhawan and the move paid off as the pair stitched a quick-fire partnership at the top of the order. It’s not likely that Hyderabad will now tinker with that combination which means Hales will have to continue warming the bench.

Manish Pandey has not had a great season by his standards, but in the last couple of games, he has looked to be regaining his touch back and Hyderabad will probably not contemplate the possibility of replacing him with Deepak Hooda.

CSK rested Watson in the last group game and the big Aussie opener richly deserved that break. His workload has been immense as he has had to play a part with both bat and ball and having a bit of a breather would have done his body a world of good. The 36-year old will be freshened for this game and will walk into the XI for Faf du Plessis who couldn’t make his opportunity count against Punjab.

Sam Billings has been failing on a consistent basis in the middle order, but the fact that he is one of the very few good fielders in the CSK line-up and does an important job fielding in the deep might just prompt Dhoni to keep him in. Also, the Wankhede surface might suit Billings’ game as it’s not slow and sluggish and offers good pace and bounce.

Both the group games between CSK and Hyderabad went in favour of CSK and one of the main reasons behind that was both the matches were played on true decks. Hyderabad’s bowling throughout this tournament has been at its best only when the decks have been sticky and two-paced. Since there is more of a probability of the Wankhede deck turning out to be a true one rather than two-paced, CSK have a slight edge over Hyderabad.

The batting prowess in the Chennai ranks also makes them the favourites. They are easily the strongest batting side in the tournament as not only do they bat deep, but also possess quality in abundance. Most of their batters have been in form as well. Hyderabad will back Rashid Khan to rip through CSK’s batting, but it won’t be easy for the Afghan leggie if there is not enough pressure applied from the other end.

The prediction is for the Chennai Super Kings to beat the Sunrisers Hyderabad in this match and make it through to the final of IPL 2018. 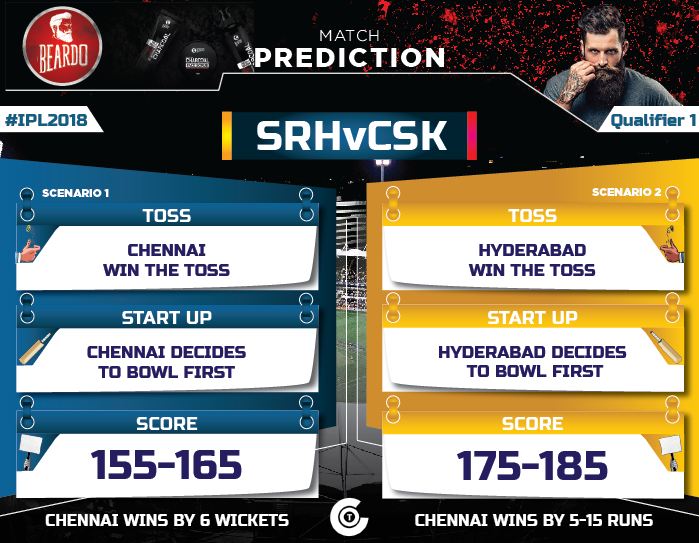