While the bowlers of the Sunrisers were absolutely unplayable on the day, Faf du Plessis was the only man who was able to overpower them.

The Chennai Super Kings (CSK) entered into their seventh IPL final only due to the special effort form Faf du Plessis. The Sunrisers Hyderabad (SRH) had botched up their chase by bowling magnificently and it was only about sealing the game for them. But the sensational South African kept his cool and took the game deep only to unleash himself in the last three overs. However, it was a brilliant effort from their bowlers up front as they restricted the Orange Army to a small total of 139 runs.

Dwayne Bravo was struggling to find his line and length in the previous matches in the lead up to the playoffs. But the champion players raise their game in the big matches and he did the same for CSK at the Wankhede Stadium. It was his spell that kept the opposition batsmen on the tenterhooks and didn’t give many runs at all.

He was introduced into the attack soon after the end of powerplay and he scalped the key wicket of Shakib Al Hasan in the very first over. He bowled a slower delivery which went horribly wrong down the leg side and was asking to be whacked. But the left-handed batsman was strangled down the leg-side only for MS Dhoni to take a good catch down. The pressure increased immensely on SRH as he unfurled his deceptive slower balls beautifully and kept a lid on the run-scoring.

Surprisingly, he wasn’t kept for the death overs by Dhoni was brought back for his second spell in the 15th over and the magician with the ball took a magnificent catch to send back the dangerous Yusuf Pathan. It was full delivery from Bravo as the eyes of the batsman lit up who struck it hard. The ball was in the air and went low towards the bowler who stunningly managed to take it. Bravo went down with both the hands with very little time to react and it stuck even as he started celebrating with the dance moves.

MS Dhoni’s decision to retain Faf du Plessis ahead of Sam Billings had surprised everyone. But what a masterstroke it proved to be! The Men in Yellow were collapsing like anything in front of some exceptional bowling effort from the Orange Army. But he stood there like a rock and played a magnificent knock to take his team through in a topsy-turvy game.

He opened the innings along with Shane Watson and didn’t even face a single in the first couple of overs. In the meantime, he lost his partner as well and the suit was followed spectacularly by Suresh Raina and Ambati Rayudu. Du Plessis had played only 6 balls until the end of the powerplay overs and soon he saw his skipper being castled by Rashid Khan. The Sunrisers kept on tightening the screws as the South African kept on playing calmly stitching small but crucial partnerships.

Once the game went into the final six overs, he took charge. The fighter from the rainbow nation started picking his bowlers then and was amazingly successful in it. He got the support from Deepak Chahar and Shardul Thakur as well but the architect of the heroic win was Du Plessis who launched an assault on Carlos Brathwaite in the 18th over to turn the game on its head.

CSK needed 43 runs off last three overs and he smashed 3 fours and a six which brought back his team in the game. While the three fours were pleasing to the eyes, the maximum which he hit was absolutely magnificent. Brathwaite kept on bowling in his slot and the veteran was never going to miss as he picked the bones out of a length ball. In the end, it was a huge six down the ground off Bhuvneshwar Kumar in the last over which sealed CSK’s place in the final as the celebrations began in their camp. 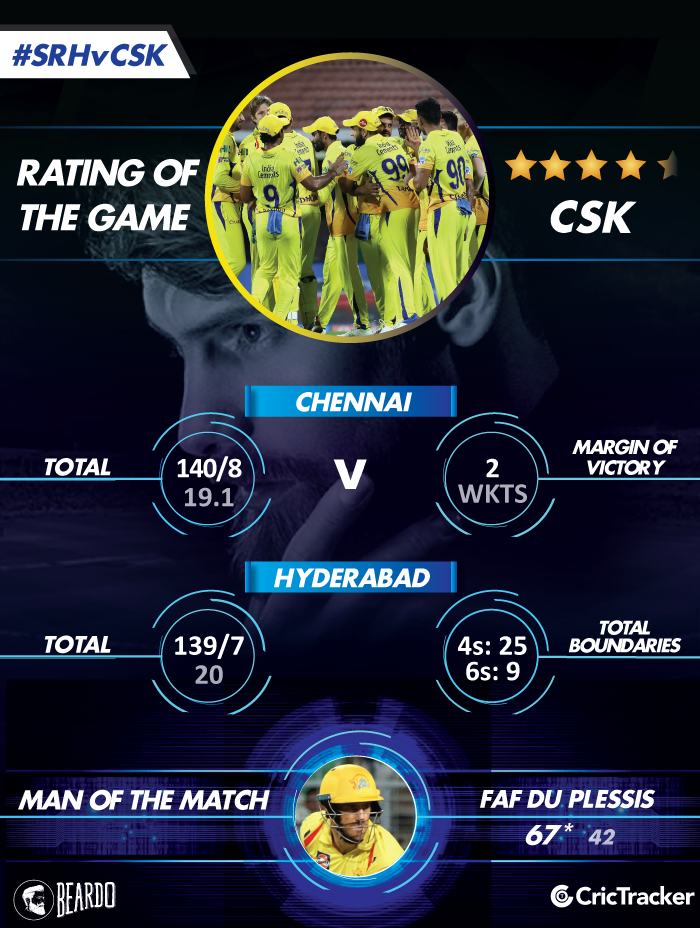