IPL 2018: Qualifier 2, KKR vs SRH – Most Valuable and Liable Player of the game

IPL 2018: Qualifier 2, KKR vs SRH – Most Valuable and Liable Player of the game

It won't be an overstatement to say that Rashid Khan singlehandedly took Sunrisers Hyderabad into the final.

The Sunrisers Hyderabad (SRH) made it to their 2nd IPL final after a close 13-run win over the Kolkata Knight Riders in the 2nd qualifier at the Eden Gardens. The Sunrisers’ middle-order once again struggled to carry the momentum as they finished with 174/7 on the board thanks to a late blitz from Rashid Khan. The home side were cruising in the chase as they were 93/2 at the half-way mark. It was Rashid with the ball this time, made the difference for his team with three wickets as the Knight Riders could only make 160/9 in the end.

It won’t be an overstatement to say that Rashid Khan single-handedly took Sunrisers into the final with every bit of his performance in this game. His 10-ball cameo included four sixes and two fours which propelled the team’s total to 174. The leggie took the crucial wickets of Robin Uthappa and the dangerous overseas players Chris Lynn and Andre Russell. He was involved in a runout as well and took two crucial catches in the final over. Rashid was the Most Valuable Player of the match by a fair margin as his performances earned him a value of 1.25 crores as per the CricTracker’s Player Value Algorithm. 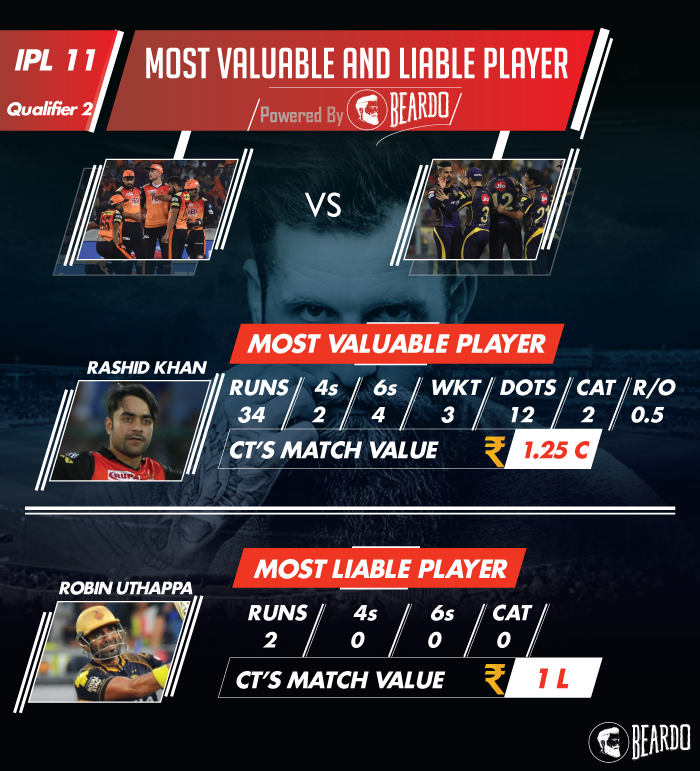 Chris Lynn earned the 2nd best value from the game scoring a 31-ball 48 which was valued at 53 lakhs. Robin Uthappa was the Liable Player of the match scoring just two runs. His Karnataka team-mate Prasidh Krishna was close to bagging the tag as he conceded 56 runs in his four overs after a decent outing in the Eliminator. Shubman Gill’s 18-ball 30 kept the Kolkata Knight Riders alive in the game which was valued at 32 lakhs. Sunil Narine’s economical bowling and his blitz as an opener were valued at 42.5 lakhs. 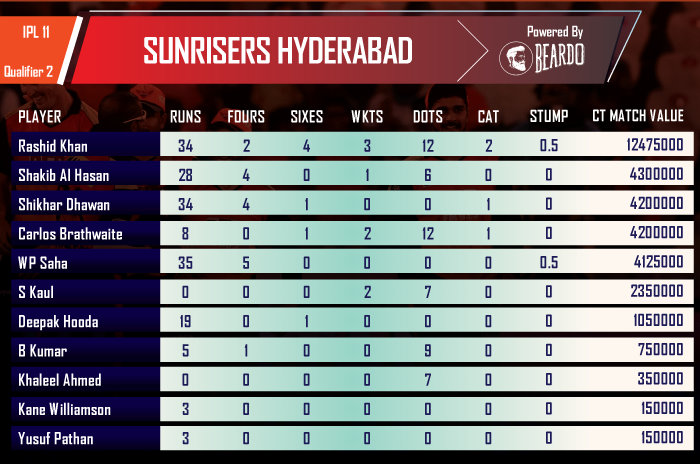 Both Kane Williamson and Yusuf Pathan earned the lowest values for Sunrisers in this game scoring just three runs. Shakib Al Hasan had one of the vital performances in the game as his wicket of Dinesh Karthik was the game-changer. The Bangladeshi all-rounder earned a match value of 43 lakhs which is three times his average match salary. Shikhar Dhawan gave a perfect start to his team 24-ball 34 and took the crucial catch of Russell in the slips. His match contributions were valued at 42 lakhs as per the CT’s algorithm. 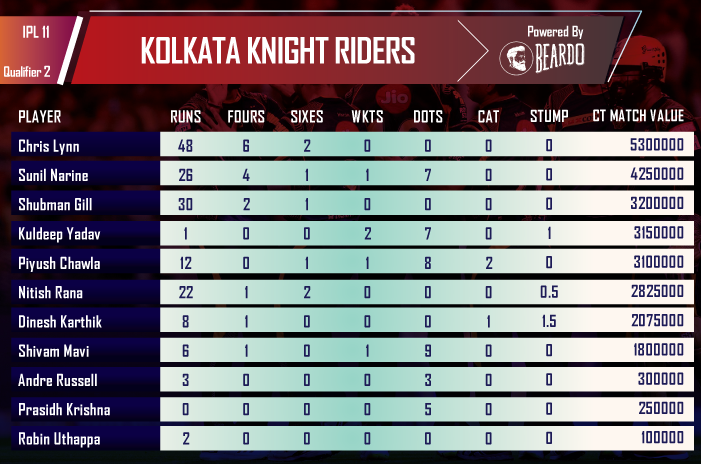