Sunrisers Hyderabad has failed to get going in the last few matches which did affect their results as they lost four in a row including a thrilling Qualifier which they lost by two wickets. They face a must-win situation in the 2nd qualifier against the Kolkata Knight Riders who have won each of their last four matches. The Hyderabad franchise is known to be poor travellers to the Eden Gardens losing five in five before they ended their jinx this season.

Sunrisers’ batting struggled with consistency especially their middle-order that failed to score runs. Whenever their top order gave good starts, the middle-order batsmen failed to finish well. Carlos Brathwaite’s blitz was only saving grace for SRH in their previous game against CSK after their top order fell cheaply. Their recent performances will demands a longer stay at the crease for their top-order to keep them going. The management will expect their skipper Kane Williamson and the star Indian batsman Shikhar Dhawan to do that job for the team.

Dhawan was well known for batting through in the previous editions for the Sunrisers Hyderabad before changing his playing style by becoming more aggressive. The left-hander carried his form from the limited-overs Internationals for India in the last one year into this IPL season. The Knight Riders will look to stop Dhawan early with their premier bowler Sunil Narine. The off-spinner has a good history of making the opener struggle. 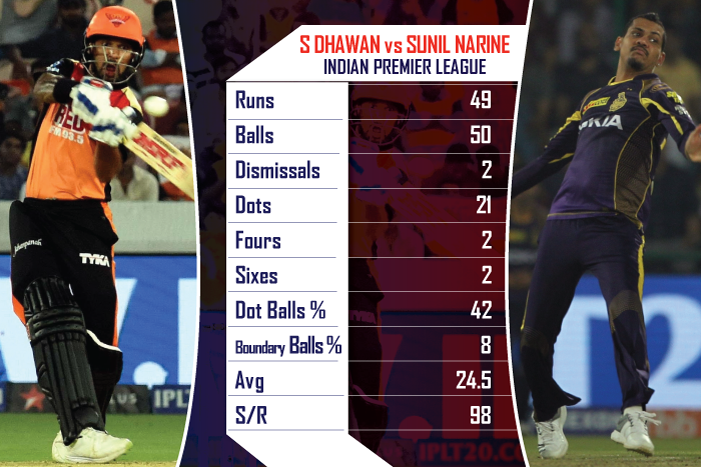 Dhawan managed to score only 49 runs in the 50 balls he faced from Narine and got out twice including once in the game at Kolkata earlier this season. Interestingly, neither of these two players have a decent record to their name in IPL playoffs/knockouts. Shikhar Dhawan scored just 99 runs in the nine innings he played at the IPL knockout stage bagging three ducks while Narine conceded 84 runs for his three wickets in the 8 IPL playoff matches.