Rashid Khan was the star of the game hands down.

Rashid Khan alone, with his all-round performance, has taken the Sunrisers Hyderabad (SRH) into the final of the Indian Premier League (IPL). The Kolkata Knight Riders (KKR) tried their best but they just couldn’t get past the bowlers of the SRH who were too good in the post-powerplay phase. Moreover, they could’ve manipulated Rashid’s four overs and attacked the other bowlers to win the game. Instead, ended up giving 3 key wickets to him and eventually fell 13 runs short of the target.

Kuldeep scalps a couple in his first over

Kuldeep Yadav has conceded second most sixes this season but the chinaman has come back in form at the right man for the KKR. The Sunrisers had got off to a decent start and his team needed a wicket desperately. The scoreboard read 56 runs after 7 overs and Kuldeep was introduced into the attack. He struck off the first ball by pinning Shikhar Dhawan in front of the stumps. It was a nicely floated delivery around middle stump and the batsman went for the sweep across only to miss it altogether.

The ball thudded into his back leg and there was no question of the umpire not raising his finger. The worst was yet to come for the Orange Army. The man in form and the Orange Cap holder of the tournament Kane Williamson was next one to go back to the hut in the same over. He failed to pick the wrong ‘un and was done in completely. The ball was again tossed up nicely around off as Kane prodded forward to drive without reaching to its pitch. Finally, he ended up edging the ball and Dinesh Karthik took an excellent catch.

The over turned the game on its head and the Sunrisers never managed to score runs at a fair clip. In the end, it took a crazy cameo from Rashid Khan to take them to a competitive total of 174 runs.

Rashid Khan loves the big stage and he sensationally delivered his all-round best performance on the day when his team needed the most. He came out to bat with less than three overs in the bank and slaughtered the bowling attack. His cameo of 34 runs off just 10 balls included 4 massive sixes and a couple of fours as the Sunrisers added 50 runs in the last three overs.

However, his real job was to spin the web around the KKR batsmen and he did exactly the same. Things were not going in the favour of the visitors as the Men in Purple and Gold amassed more than 60 runs in the powerplay. Then the man from Afghanistan came to bowl and suddenly things started to look brighter for the bowling side. The duo of Chris Lynn and Nitish Rana played out his first over as it went only for three runs. But he castled Robin Uthappa in his next over who over ambitiously went for a reverse sweep early in his innings.

Then came the killer blow as he caught Lynn plumb in front of the stumps who was adamant at playing a sweep shot off every delivery. The wicket brought back SRH in the game sensationally and Rashid’s contribution with the ball was not yet done. Meanwhile, his acrobatics in the field as caught Nitish Rana short of his ground which started the slide for KKR. Rashid, in his final over, nipped out a crucial wicket of Andre Russell who went to cut the flat googly pitched outside the off stump and ended up giving the catch to the slip fielder stationed.

The magical leggie was not done yet and he went on to take a couple more catches in the final over which were extremely crucial and won the game almost single-handedly for the SRH. 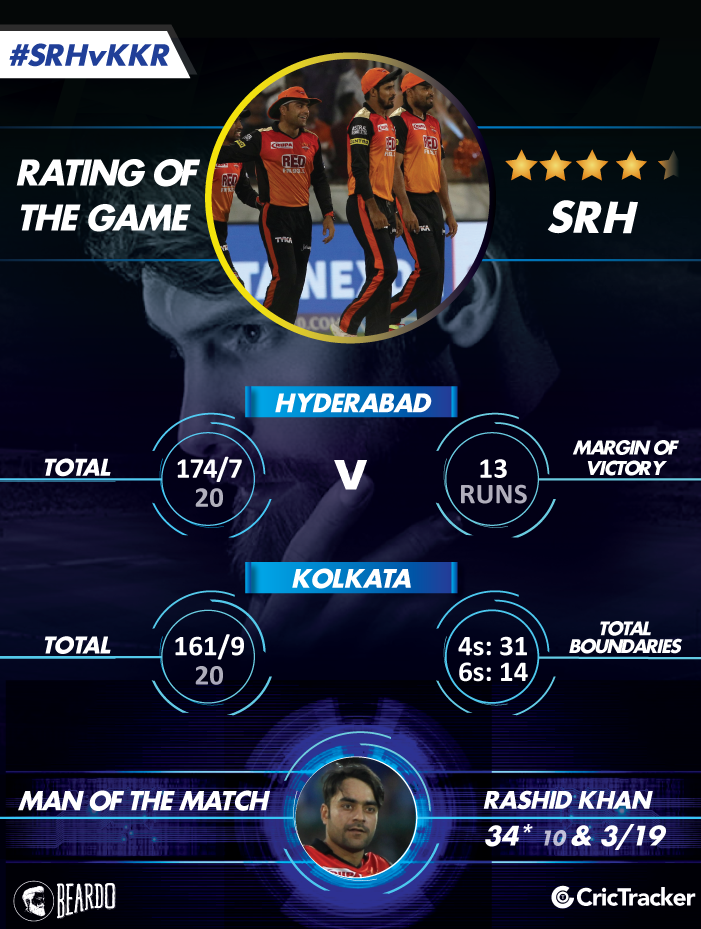