IPL 2019: Chennai Super Kings to fight it out against Delhi Capitals in Qualifier 2

IPL 2019: Chennai Super Kings to fight it out against Delhi Capitals in Qualifier 2

The Qualifier 2 match is going to take place in VDCA Cricket Stadium, Vizag on Friday 10th of May at 07:30 PM IST.

After Delhi Capitals’ astonishing victory over SRH in the Eliminator match, it qualified for the Qualifier-2 match against Chennai Super Kings, the losing team of Qualifier-1. The winner of Qualifier-2 will play against Mumbai Indians in the finals. The Qualifier-2 match is going to take place in Dr. Y. S. Rajasekhara Reddy ACA- VDCA Cricket Stadium, Visakhapatnam on Friday 10th of May at 07:30 PM IST.

Chennai Super Kings lost the match against Mumbai Indians in the Qualifier-1. CSK opted to bat first and scored a meagre total of 131 runs for the loss of 4 wickets. Ambati Rayudu and MS Dhoni were the highest scorers with 42 and 37 runs respectively. Mumbai Indians chased the target with ease and made it to the finals directly leaving CSK to compete against the winner of Eliminator match. Surya Kumar Yadav earned the player of the match title scoring a whopping 71 runs in 54 balls.

The Eliminator match took place between Delhi Capitals and Sunrisers Hyderabad. Delhi Capitals won the toss and opted to Bowl. SRH scored 162 runs for the loss of 8 wickets. Delhi Capitals chased the score in just 19.5 overs with 2 wickets still in hand. Prithvi Shaw and Rishabh Pant were the highest scorers of the match with Shaw scoring in 56 (38 balls) and 49 runs (21 balls) respectively. Rishabh Pant became the player of the match.

Both CSK and DC teams are equally strong and are highly competitive. Since this is the last match that lets them into the finals, the battle is going to be cutthroat and highly emotional too. 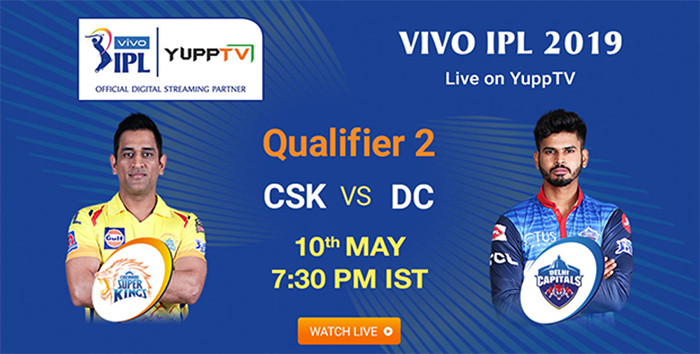 Watch this Epic Qualifier-2 between CSK and DC on YuppTV from Continental Europe, Singapore, Malaysia, South America, and South East Asia. Download the YuppTV App to watch all of IPL Final match and the past matches once again on Smartphones, Smart Televisions, and other internet-enabled devices.

You can watch the Live Streaming by clicking here!