IPL 2019: Deepak Chahar breaks the record for most dot balls bowled in an innings

IPL 2019: Deepak Chahar breaks the record for most dot balls bowled in an innings

It took 10 years for a bowler to break the previously held record.

The Chennai Super Kings’ bowlers put up an exceptional show in the game in Chennai against the Kolkata Knight Riders. It was a low-scoring affair yet again at the Chepauk and the KKR batsmen failed to apply themselves well. Deepak Chahar took the home team off to a brilliant start by picking three wickets in his opening spell.

The pacer broke the back of the KKR line-up by dismissing Chris Lynn first. The Australian played good knocks in the last two games and seemed to be in decent touch. But, he didn’t bother to trouble the scorers in this match and got out for a block. Nitish Rana was then dismissed after he played a really poor shot.

Even though his team lost two quick wickets, he hit the ball in the air and straight to the fielder. Robin Uthappa also met with a near similar fate. After hitting two good boundaries initially, he was dismissed for 11 runs. Deepak Chahar’s spell brought KKR down to 24/4 quite early in their innings. During this brilliant spell in this match, the Agra pacer also broke a long time record.

15 out of the first 18 balls Chahar bowled were dots. He needed five more of those in his last over to break the record for most dots in an innings. The 26-year-old came back to bowl the 19th over of the game with Andre Russell on the strike. He did quite a fabulous job as he gave away just one six and got five blocks. The batsman not opting to take the singles further helped his case.

The previous record by jointly held by Ashish Nehra, Munaf Patel and Fidel Edwards. All of them bowled 9 dots each in 2009 in assisting conditions in South Africa. It took nearly 10 years to break this record.

Most dots in an innings in IPL: 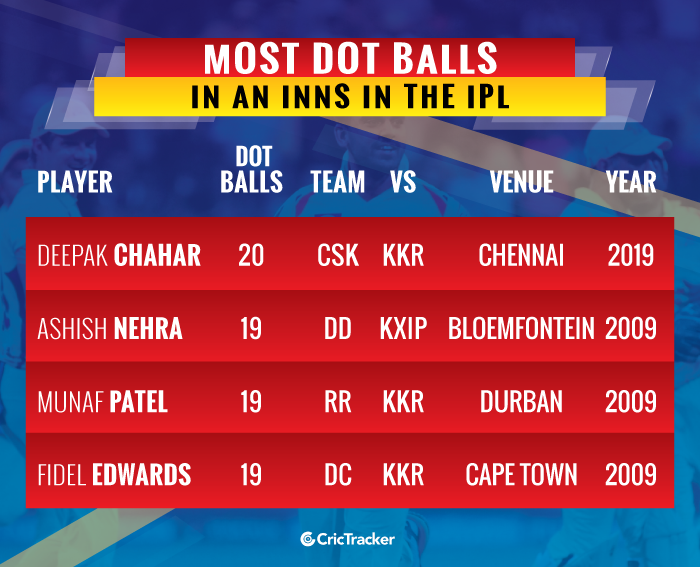