Here we look at the players Delhi Capitals could go for at the auction.

The Delhi Daredevils changed to Delhi Capitals from this season in a hope of changing their fortunes and going closer to the achieving the title. Though the Delhi franchise is among the oldest teams of the Indian Premier League (IPL) history but went against all odds to rename their team. Ahead of the 2019 edition of the tournament, Delhi traded back their local player Shikhar Dhawan who featured for them back in 2008; the inaugural edition of the league.

The franchise has reappointed Shreyas Iyer as the skipper of the team who took over from Gautam Gambhir in the middle of the season. The management also released nearly half their side ahead of the new season. In the forethcoming auction, the Delhi Capitals will have a purse of INR 25.5 crores for buying as many as 10 players. They can try for as many as three overseas players during this auction.

Here we look at the players Delhi Capitals could go for at the auction:

With the likes of Prithvi Shaw, Shikhar Dhawan, Shreyas Iyer and Rishabh Pant in the batting line-up, an Indian player in middle-order, as a backup option, will benefit the team. They could aim for young Sarfaraz Khan who has the potential for this level but has been battling with injuries over the last couple of seasons. Anmolpreet Singh can be used as a floater who can come in handy in the future.

With a good amount remaining in the purse, Delhi can try for Shivam Dube who can be a value-adding player to the team with his all-round skills. They can also bring in the local lads- Anuj Rawat and Lalit Yadav. Rawat will be useful as a backup keeper option as Rishabh Pant is the only specialist wicketkeeper in their squad at the moment. 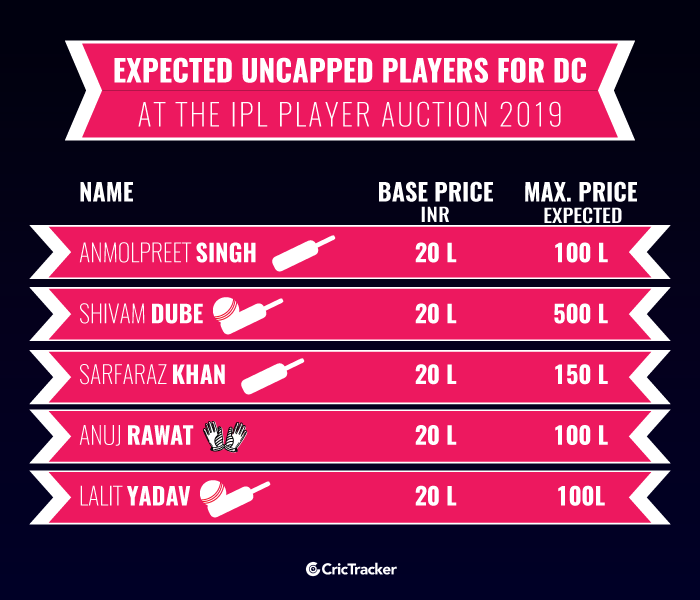