6 IPL titles, 4 Champions League titles, more than 206 wins each in T20s - is what these two sides have achieved together which is nothing short of astonishing.

All the teams have put in so much hard work on and off the field in the Indian Premier League (IPL), but not all can make it to the summit clash. A lot of experts would’ve predicted for this to happen eventually and it has happened, for the fourth time in IPL history, Chennai Super Kings will lock horns with arch-rivals Mumbai Indians for the title.

6 IPL titles, 4 Champions League titles, more than 206 wins each in T20s – What these two sides achieved together has been nothing short of astonishing. However, the rivalry has looked a bit pale since the Yellow Army made a comeback last season. They played five games against each other since the start of the 2018 season and Mumbai have won four of them.

It all goes irrelevant when the stakes are so high as either one of them might crumble to the pressure. Chennai might be less vulnerable to the extra pressure considering the experience factor, but Mumbai too have no dearth in that aspect. Hyderabad, which hosted the final back in 2017 between Rising Pune Supergiant and Mumbai Indians, is all set for this herculean clash and surely, the fans are up for a ripper.

With six brilliant bowling options and seven top-class batsmen available, Mumbai Indians literally couldn’t have asked for a better combination. Krunal Pandya and Hardik Pandya are the balancing factors in the Mumbai team. The fast bowling trio of McClenaghan, Bumrah and Malinga makes the side look very threatening. Suryakumar Yadav is starting to get the runs when it matters the most and with Quinton de Kock in great form, this side just looks too formidable.

Mohit Sharma is expected to replace Shardul Thakur in the XI that showed up against Delhi if at all they do make a change in the combination. Thakur bowled just one over and conceded 13 runs. Faf du Plessis and Shane Watson showed their class in a knockout game, proving why experience counts at the biggest stage.

The spin trio of Harbhajan Singh, Ravindra Jadeja and Imran Tahir have been a revelation this season and might find some assistance from the Uppal track. Their leading run-scorer for the season MS Dhoni continues to be the focal point of everything they do. 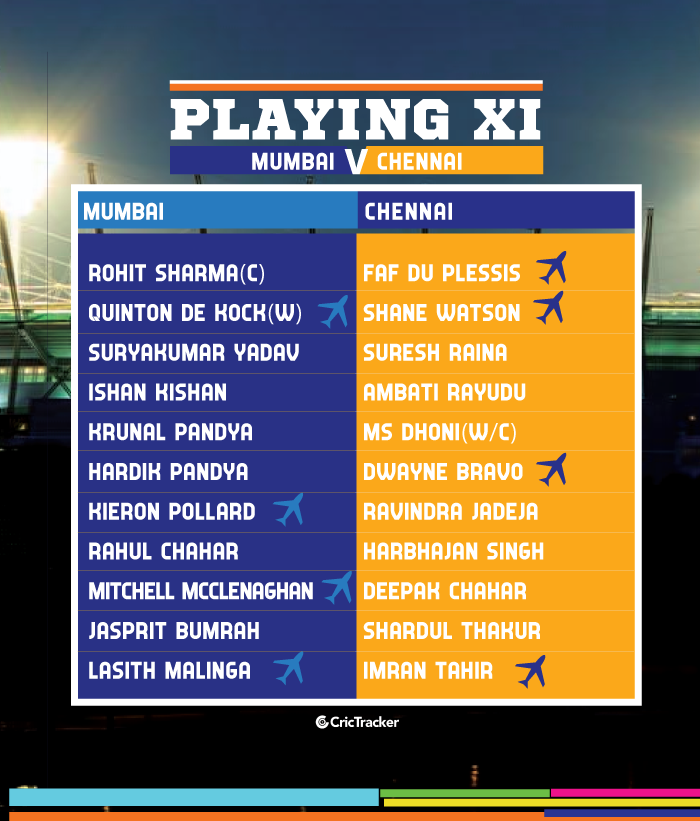 There will be many eyes on the skipper Rohit Sharma, who has a chance to become the only player in IPL history to be a part of five title-winning sides. He has struggled for runs more often than not this season, but he is one of those players who loves to showcase themselves on the big stage. There ain’t no platform bigger than this in Indian cricket right now and team need their main man to step up.

After a 10-season association with the mighty club from the West, Harbhajan moved Down South to join the Super Kings. Just when people thought his time was over in professional cricket, the legendary off-spinner showed age is just a number.

2 – If Rahul Chahar and Deepak Chahar are in the XI on Sunday, it will only be the second time two brothers feature in the XIs of an IPL final. Krunal and Hardik Pandya featured in MI’s playing XI in 2017.

4 – This is the fourth time we are witnessing a Chennai vs Mumbai finale, which is the most for any combination. Royal Challengers Bangalore faced a Hyderabad franchise twice in 2009 (Chargers) and 2016 (Sunrisers), but they are registered as different teams. Hence, no other combination was spotted in the final twice apart from Chennai and Mumbai.