CSK's title defence starts with the season opener at their den in Chennai on March 23.

The Chennai Super Kings have always been the team to beat in the history of the Indian Premier League (IPL). The three-time champions have been the most consistent side in the tournament roster. The Men in Yellow are all set to defend the title this season. Their title defence starts with the season opener at their den in Chennai on March 23. They will be hosting the southern derby against the Royal Challengers Bangalore (RCB).

The schedule sees the CSK play seven home matches, and as many away matches, as has been the script of the tournament over the years. The M.A. Chidambaram Stadium in Chennai will be the home venue for the Super Kings for the entire duration of the tournament. This comes as a very big news for the fans of the team. Last season, the fans had flocked the stadium during the practice sessions and had also shown their immense support for the team when they played their initial home games.

However, due to certain issues, the home venue for the Men in Yellow had to be changed, and Pune served as the home ground for the team thereafter.

After the first game against RCB, a good long break is what follows for Chennai Super Kings for their next home game. Their second match of the season will be against the revamped Delhi franchise in an away fixture at the iconic Kotla on March 26. The team then heads back to Chennai for their next match against the Rajasthan Royals, and then head to Mumbai for the much-awaited clash against the Mumbai Indians on April 3.

A couple of home matches would follow up for the MS Dhoni-led side against the Kings XI Punjab and the Kolkata Knight Riders on April 6 and April 9. The first half of the league stage will be capped off for the Super Kings in the reverse fixture against the Royals in Jaipur.

In the second half of the league stages, Chennai Super Kings will play three home matches, and four away matches. The final league game for the franchise would be a Sunday encounter on May 5 against the Kings XI Punjab in Mohali. The last home match of the season for the Yellow Army would be against the Delhi Capitals on May 5.

Here is the complete schedule of the Chennai Super Kings: 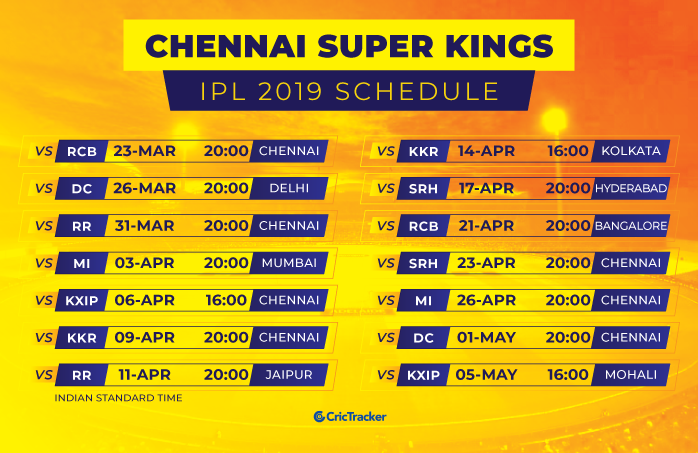