The last league game for the team will be against the Delhi Capitals on May 4.

Two franchises made their comeback on the IPL roster last season. And it was two contrasting stories in the season for the two sides. While a certain Chennai Super Kings went on to lift the title and be crowned the eventual champions, the other team – Rajasthan Royals – had a rather familiar fortune in the season as to what they had a couple of years ago when they had last played in the tournament.

Despite a new look side, the Royals dearly missed an experienced campaigner in their side. Their need to have a calm head who could guide the team in tense situations was evidently felt. This season, they have been bolstered by the return of Steve Smith, a known star in his own might. The Rajasthan Royals would hope that Smith brings good fortunes for the side in the tournament this year.

Also, the team will hope that the stars they unearthed last season – Jaydev Unadkat, K Gowtham, Shreyas Gopal, Rahul Tripathi, and Jofra Archer – come good this season as well. The Royals have their base set in Jaipur and unlike the previous editions, they will get all their 7 home matches played at the Sawai Mansingh Stadium in Jaipur.

The Royals will begin their campaign in IPL 2019 on March 25. They will host the Kings XI Punjab in Jaipur. They will then travel Hyderabad for their first away game of the season, to be played against the Sunrisers Hyderabad. They will continue their trip down south as they play the Chennai Super Kings in Chennai in their third match of the season.

The team then heads back to Jaipur to play three consecutive home matches against the Royal Challengers Bangalore, Kolkata Knight Riders, and the Chennai Super Kings. The last of the 7 home matches for RR will be played on April 27 against the Sunrisers. This will be followed by two away fixtures for the team in the league stages. The last league game for the team will be against the Delhi Capitals on May 4.

Here is the complete league stage schedule of the Rajasthan Royals: 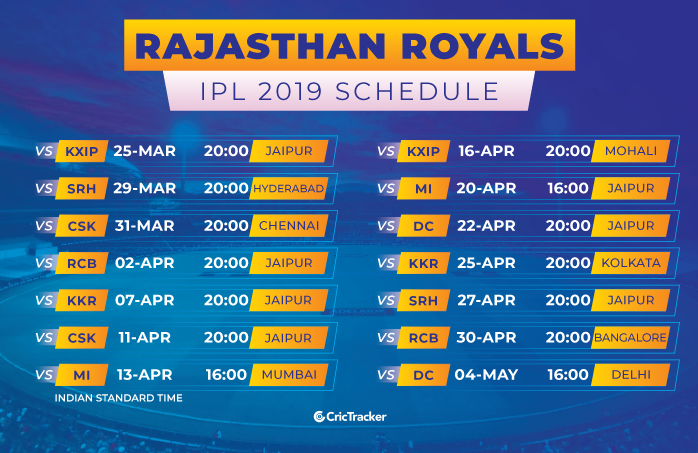