KKR currently have 13 Indian and 8 overseas names in their ranks.

Kolkata Knight Riders (KKR) had the smallest squad in last year’s Indian Premier League (IPL) as they shelled out massive amounts for a few overseas stars. However, a few of them developed injuries owing to which the Knights didn’t have many alternatives to choose from. However, the team, under their new skipper Dinesh Karthik, did well and progressed to the second qualifier in Kolkata.

Going into the next season, Karthik and Co released quite a few players, which included the likes of Aussie paceman Mitchell Starc and Englishman Tom Curran. Hence, they would want a decent overseas fast bowler in their ranks, who can play the entire season. This time around, they would want to have a larger squad from which they can pick a replacement if someone picks up an injury.

The Knights roped in Windies all-rounder Carlos Brathwaite, who has fond memories at Eden Gardens, in their ranks for a mammoth 5 crores. They have picked a couple of unknown, yet useful pacers in Anrich Nortje from South Africa and Harry Gurney from England at their base price of 20 lakhs and 75 lakhs respectively.

New Zealand speedster Lockie Ferguson also would be donning the Knights’ jersey next season and was picked at a price of INR 1.6 crores from a base price of 1 crore. English batsman Joe Denly, who would next play for Sydney Sixers in the upcoming Big Bash League (BBL) was also drafted in at his base price of 1 crore.

The Shah Rukh Khan-owned franchise also brought the services of some Indian unknown faces, including the likes of Nikhil Naik, Yarra Prithviraj, and Srikanth Mundhe 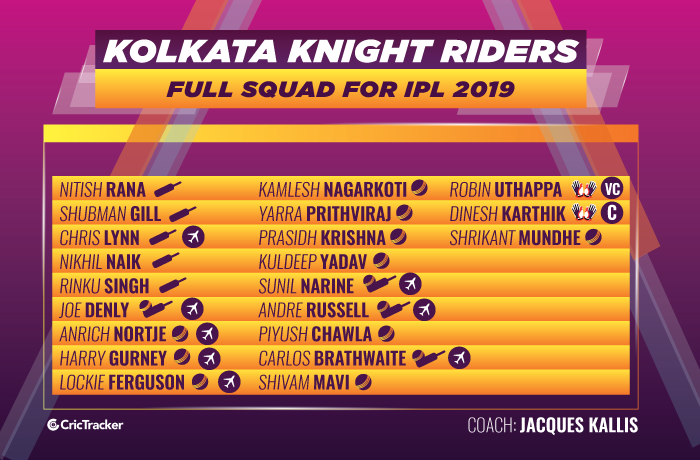