IPL 2019: Match 10, DC vs KKR, Review – A 'Shaw'nsational knock and Kagiso Rabada pip Knights out in the Super Over

IPL 2019: Match 10, DC vs KKR, Review – A ‘Shaw’nsational knock and Kagiso Rabada pip Knights out in the Super Over

In the super over, Delhi scored 10 runs whereas KKR managed to score only 7 and fell short by 3 runs.

After two brilliant wins in their first two games at home, the Kolkata Knight Riders finally lost a match. This game that was played at the Feroz Shah Kotla was an absolute humdinger. Things boiled down right till the last over of the game where both the teams ended up with the same score. Thus, a super over was played and it was DC who managed to perform better in the crunch situation.

Prithvi Shaw looked very fluent throughout his innings and was a joy to watch. However, the nerves got the better of the youngster as soon as he got into his nineties. The youngster was dismissed on 99, which is quite a dreadful scene for any batsman. In the super over, Delhi scored 10 runs whereas KKR managed to score only 7 and fell short by 3 runs.

The proceedings in the last game at the Feroz Shah Kotla suggested that the pitch gets slightly better to bat on in the second innings. Hence, the Delhi Capitals decided to field first after winning the toss. The Knight Riders were blown away quite early in the innings. The top-four batsmen fell quickly. Nitish Rana and Robbie Uthappa, who were the stars in the last game fell for 11 and 1 run respectively. Then Shubman Gill was also dismissed run out.

At 61/5 after 9.1 overs, KKR seemed to be in great trouble. Not often do the teams recover from such situations and usually end up getting bowled out for cheap scores. But Dinesh Karthik and Andre Russell have been exemplary with the way they fought back. The Jamaican played the kind of cricket he usually does and didn’t let the pressure change his game.

With Karthik’s support at the other end, he raced his way to a quickfire 62 which came off 28 balls. He got out in the 18th over of the game while the skipper was dismissed in the next over after he reached 50. Piyush Chawla’s 5-ball 12 and Kuldeep Yadav’s 5-ball 10 got KKR to 185/8 at the end of 20 overs which seemed decent enough.

Even though they had a decent total on the board, KKR had just five bowlers to operate with including Andre Russell. Thus, it seemed as if they were still on the backfoot. Shikhar Dhawan, after getting off to a flyer with an 8-ball 16 failed to capitalise and got out. After his dismissal, Prithvi Shaw and Rishabh Pant built a very good partnership.

The duo added 89 runs in 9.2 overs with the youngster being the aggressor. After he mustered 43 runs, Andre Russell dismissed Shreyas Iyer. Shaw kept going strong from one end but the nervousness got the better of him when he was on 99. 6 runs were needed off the last over but Kuldeep Yadav managed to miraculously defend it. Delhi won the match in the super over by 3 runs.

Man of the Match: Prithvi Shaw 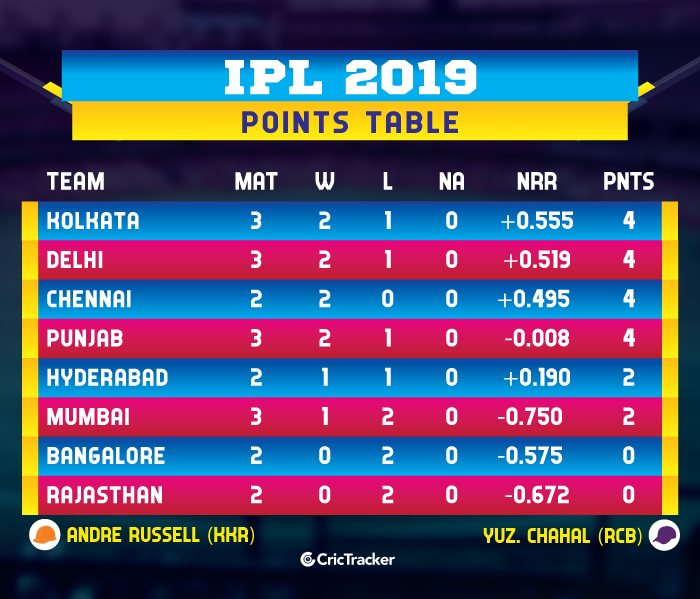