The Kings XI Punjab are unbeaten in the last five matches at the venue.

The 13th match of the ongoing Indian Premier League (IPL) will see two teams facing off who are looking rebuild their reputation in the tournament. They have built decent sides this year and are looking good after winning two out of the three matches. The Kings XI Punjab (KXIP) are looking unstoppable in Mohali while the Delhi Capitals are just coming off a sensational super over victory over the KKR back home.

It seems that the KXIP have finally found their perfect combination. The team which they fielded against the Mumbai Indians (MI) was spot on and Ravi Ashwin would be looking to go ahead with it. Their openers are doing well and unlike last year, the middle-order is also looking in good shape. Mayank Agarwal has hit the purple patch at the right time and this might be his season if he continues to bat in the same way.

The Delhi Capitals were rather lucky to get away in the super over in the previous game. They botched up an easy chase after Prithvi Shaw got out and then managed to score only 10 runs in the super over. It was only due to Kagiso Rabada who literally spit venom with each of his deliveries that they managed to overpower Andre Russell. Also, they need to make some better decisions when it comes to picking the playing XI.

There is no reason for the KXIP to change the winning combination. KL Rahul has also come back in some great form and Chris Gayle is also hitting the ball well. The middle-order comprising of Mayank, Sarfaraz Khan and David Miller looks much settled while the bowling attack is quietly doing its job as well. It wouldn’t be a surprise if the team management goes unchanged for most of the matches now.

It was baffling to see Hanuma Vihari batting down the order for them in the previous game. But the top five is packed for them and the Andhra batsman definitely needs to wait for more time now to get another chance. Axar Patel is most likely to replace him and to drop him was a rather surprising decision from the Capitals. 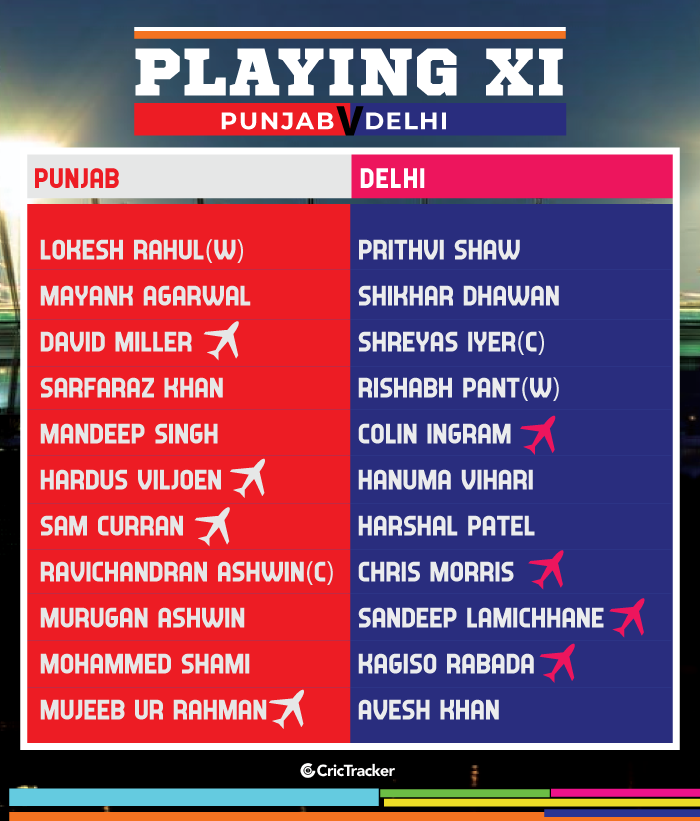 Mayank Agarwal failed to back up a good domestic season in the IPL. But this time, the confidence of playing for India is clearly visible on his face. The way he batted in the chase against Mumbai proved that there will be better scores from him this season. It will be interesting to see how he bats in this game while facing the likes of Rabada and Morris.

Dhawan, it seems, has been caught between playing his shots and playing an anchor role in this team. With the youngsters delivering consistently, his experience has to come to the fore if the Capitals are to go a long way in the tournament. With this being an away game, the Capitals will need a better effort from the southpaw opening the innings.

5 – The Kings XI Punjab have won each of their previous five matches in Mohali.