Nathan Coulter-Nile is most likely to play.

The Royal Challengers Bangalore (RCB) are left clueless this season. They have got off to an indifferent start this time in the Indian Premier League (IPL). The RCB are yet to win in four matches and the time is running out for them. They will feel good now playing at home but their opponents in the match 17 are the Kolkata Knight Riders who have played three matches thus far and have come out victorious in two of those.

Virat Kohli suggested after the previous game that they would be making significant changes for the next game and it will be interesting to see who will be axed. As of now, it seems certain Shimron Hetmyer will make way while the likes of Tim Southee and Nathan Coulter-Nile might come into the contention as well. Though the RCB should go against the wholesale changes which can affect their chances even more.

The KKR, on the other hand, are coming off a significant rest after an exhilarating encounter against the Delhi Capitals (DC) which went to the super over. Their team though is looking in good touch and the skipper Dinesh Karthik might go against making any changes after a close loss. Having said that, Sunil Narine is a key player for them and if fit, he can walk back into the XI at the expense of Nikhil Naik.

The 17th game of the IPL between RCB and KKR will be hosted by the Chinnaswamy stadium in Bengaluru.

The summer season has taken over in India and the sun will be out for the whole day in Bengaluru on Friday. But it will cool down considerably by the time the match will start. During the game, the temperature will hover around 29 Degrees Celsius and there is no rain whatsoever in the forecast.

The Chinnaswamy pitch has changed this season. It is assisting the batsmen as far as the India-Australia T20I and the RCB’s home game is concerned. With small boundaries on offer, it could turn out to be another run-fest in Bengaluru.

There is no update on Sunil Narine’s update but he is likely to be fit after a significant break. 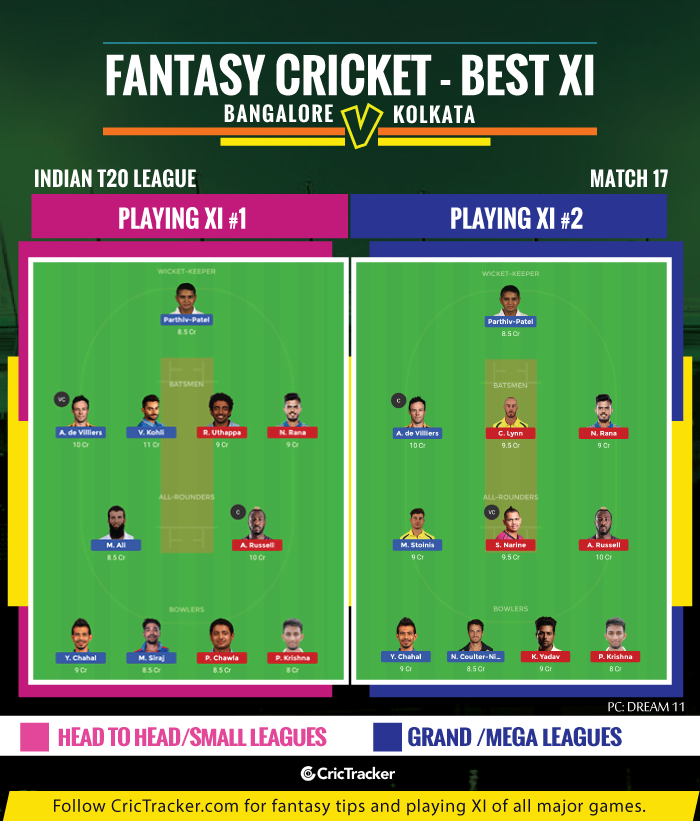 Chris Lynn is due for a big knock in this season and can pick him in the Grand League and probably make captain as well.

KKR should be able to win based on current form but one can’t rule out RCB coming hard at the visitors given that they are yet to win this season.