Royal Challengers Bangalore (RCB) desperately need a victory in order to arrest their slump in the 2019 edition of the Indian Premier League (IPL). Virat Kohli and Co lost the last four matches and are at the bottom of the points table with a horrendous Net Run Rate (NRR) of -1.901. Their next match is against the Kolkata Knight Riders (KKR) tomorrow at the renowned M Chinnaswamy Stadium in Bangalore.

As far as numbers are concerned, RCB lost their last four matches against KKR. Also, the Red Army slumped to defeat against the Knights in their previous three encounters in Bangalore. The Knight Riders are in good form after winning the home matches against the Sunrisers Hyderabad (SRH) and Kings XI Punjab (KXIP) at home. They would now look to bounce back from the defeat against Delhi Capitals (DC).

The atmosphere is expected to be nice and cool with the temperature around the 26-degree mark. The humidity will be on the lower side as well. The pitch is speculated to be a batting paradise and hence, batting second seems to be a good decision for the time being.

The Challengers may bring in Nathan Coulter-Nile at the cost of Shimron Hetmyer, who has been awful in the tournament. Nathan will partner Umesh and Siraj in the fast bowling department. Moreover, Washington Sundar may come in place of Navdeep Saini. Marcus Stoinis may open with the in-form Parthiv Patel with Kohli dropping to number four. The onus would again be on AB de Villiers.

Sunil Narine is likely to come back in place of Nikhil Naik. Chris Lynn would be hoping to get his form back. Robin Uthappa and Nitish Rana need to step up and deliver. The focus will again be on Andre Russell with both bat and ball. Karthik and Shubman Gill have to play their roles as well. Ferguson and Krishna are the fast bowlers with the spin-trio of Narine, Kuldeep and Chawla.

The prediction is for KKR to win the match. 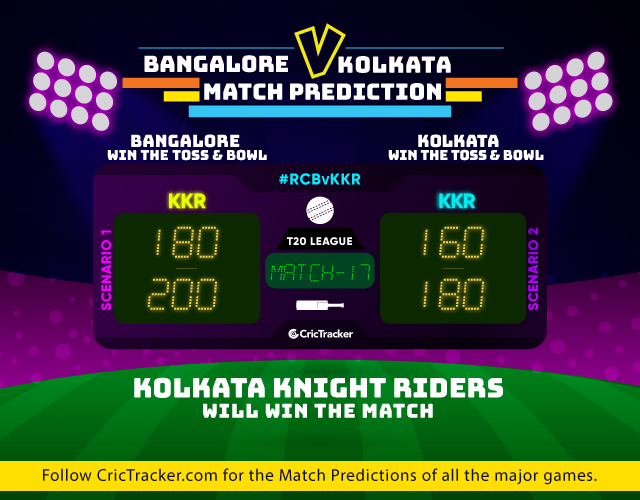