Both the teams have lost their previous match.

The action shifts to Mohali now with the Kings XI Punjab (KXIP) and the Sunrisers Hyderabad (SRH) facing off in the match 22 of the Indian Premier League (IPL). Both the teams have endured heart-breaking losses in their previous encounters and would be eager to get back to the winning ways. While the SRH suffered an inexplicable batting collapse against the Mumbai Indians (MI), the Punjab team couldn’t chase down 161 against the CSK.

Having said that, Bhuvneshwar Kumar-led side still looks the strongest side with all the bases covered. Only their middle-order is not firing and the team management will be aware of the side’s shortcomings. David Warner and Jonny Bairstow should give them a good start and the death overs should bowling should also improve. The likes of Manish Pandey and Deepak Hooda have to take up more responsibility as well.

The Kings XI, on the other hand, should look to plan properly after botching up the chase sensationally despite having wickets in hand. Ravi Ashwin was their best bowler and the only wicket-taker in the last game. They love playing in Mohali and are on a winning-spree at the venue. It will be a task cut-out for their opponents this time around and it is expected to be a mouth-watering clash.

Mohali pitch has so far lived up to the expectations of generating high-scoring game of around 170-180. This is the third game in the city and it is expected to be another such encounter. As far as the weather is concerned, it gets cooler in the evening with the temperature significantly dropping up to 24 Degrees Celsius during the match.

The home team are unlikely to change their line-up after one loss but they might ponder over resting their speedster Mohammed Shami who has been bowling his heart out in every match. Shami conceded 41 runs in the previous game and some time off the game might help him regain his mojo. Ankit Rajpoot looks the best candidate to replace Shami in that case.

The Hyderabad-based franchise might tweak their line-up. Deepak Hooda hasn’t done much so far this season and Abhishek Sharma who impressed last season with Delhi might replace him. Moreover, Abhishek can also bowl if needed and is an attacking batsman. He looks a good bet at the moment if the Sunrisers are to change their fortunes as far as the middle-order is concerned.

The prediction is for the SRH to get back to the winning ways. 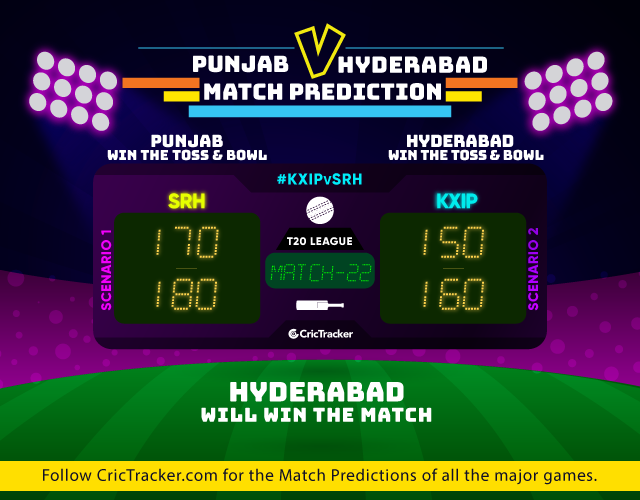