The Chennai Super Kings inch a step closer to the playoffs after registering their fifth win.

The 23rd match of IPL 2019 between CSK and KKR was a low-scoring affair yet again. While the pitch seemed to have got better in the last game against KXIP, it was back to normal in this match. It was extremely sluggish and the visitors failed to apply themselves in this game. Andre Russell’s half-century helped the ‘Men in Purple and Gold’ go past the 100-run mark.

However, that was never going to be sufficient with the dew factor playing a part in the second innings. Assessing the scenario was a lot easier for CSK as they had a target in mind. Their batsmen played cautious cricket and took the team over the line. Faf du Plessis played a responsible knock in the match as the Super Kings now registered their fifth win in the tournament.

The Chennai Super Kings were lucky with the toss going their way. MS Dhoni had no equivocations in opting to bowl first in the match. The CSK bowlers were in the game straightaway as the visitors were reduced to 9/3. Deepak Chahar has terrific during the field restrictions. He dismissed Chris Lynn, Robin Uthappa and Nitish Rana very cheaply. From the other end, Harbhajan Singh picked up the scalp of Sunil Narine.

After these early wickets, Dinesh Karthik and Shubman Gill tried to consolidate the innings. But Imran Tahir dismissed both of them in quick succession as KKR further sunk to 47/6. It seemed as if they would get bowled out for a score below 70 or 80. But Andre Russell came to the rescue. He had issues with both his hamstring as well as the wrist.

But he never backed off and fought right till the end for his team. He was unbeaten on 50 off 44 balls as KKR got to 108/9 after 20 overs. It is very rare to see someone like Russell play this slow but it was the need of the hour. It was great to see him acclimate well to the situation and play a responsible knock. Though, he was given two lives during his innings.

Shane Watson scored a dozen runs in the first over of the chase. But he couldn’t stay in the middle for a long time. He was indecisive whether to hit the ball in the air or along the ground and in the process gave the fielder an easy catch after he scored 17 off 9 balls. Sunil Narine, the same bowler, also dismissed Suresh Raina for 14 runs off 13 balls.

After the first two wickets fell, the CSK batsmen played a lot more sensibly, unlike the KKR batsmen. Faf du Plessis and Ambati Rayudu played cautious cricket and tried to build up a partnership. However, Rayudu seemed to have struggled throughout his stay in the middle and got out after scoring 21 runs from 31 balls. du Plessis, though, played a responsible knock. He remained unbeaten on 43 runs and finished the game along with Kedar Jadhav.

Man of the Match: Deepak Chahar 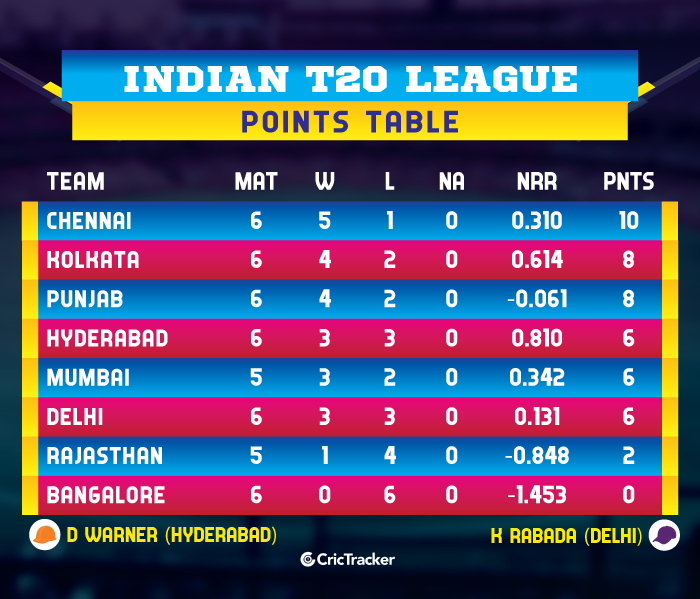