The Kings XI got the better of Mumbai Indians in the previous face-off.

The revenge time is here for the on-song Mumbai Indians (MI). They have got better of the top teams like Chennai Super Kings (CSK) and the Sunrisers Hyderabad (SRH) in the last two outings. Now the Kings XI Punjab (KXIP) will challenge them at the Wankhede stadium on Wednesday and the visitors will be confident having beaten them earlier in the season.

Mumbai Indians are in the middle of a great run and it becomes very tough to stop them once they gain momentum as a team. Beating CSK and SRH is by no means an easy task and in both the encounters, they defied the odds early on to register thumping victories in the end. Rohit Sharma and Co will be up again to breeze past the Kings XI who are also on a great run albeit while playing at home.

The Ravi Ashwin-led side defeated the SRH in their previous game in the last over thriller and are in a good space at the moment. They would love to continue the winning momentum. Their batting is clicking on a consistent basis and most importantly, the skipper is amongst the wickets regularly which wasn’t the case early on. The horses for courses selection process in the bowling department has also worked wonders for the team.

The current combination is working perfectly for the home team. Mumbai Indians are most likely to go unchanged for this game. Though Rohit Sharma hasn’t done much at the top of the order so far, he will continue to open with Ishan Kishan coming at number four. Kieron Pollard and Hardik Pandya’s form is a huge plus for the team which allows them to finish with a flourish with the bat.

Jason Behrendorff’s inclusion has confirmed an early wicket with the ball while the rest of the attack, especially Rahul Chahar is holding himself well in crunch situations.

The Kings XI are changing their playing eleven in almost every match irrespective of the result of their previous game. Mujeeb Ur Rahman seems to be making way in this game for Hardus Viljoen. Mujeeb has mostly played at home this season and the norm might continue with Ashwin acknowledging the same in the post-match presentation ceremony on Monday. Having said that, it is tough to read the captain’s mind. After all, Ashwin is known to be ‘unpredictable’ captain.

The prediction is for the Mumbai Indians to continue their winning run and make it a hat-trick of victories. 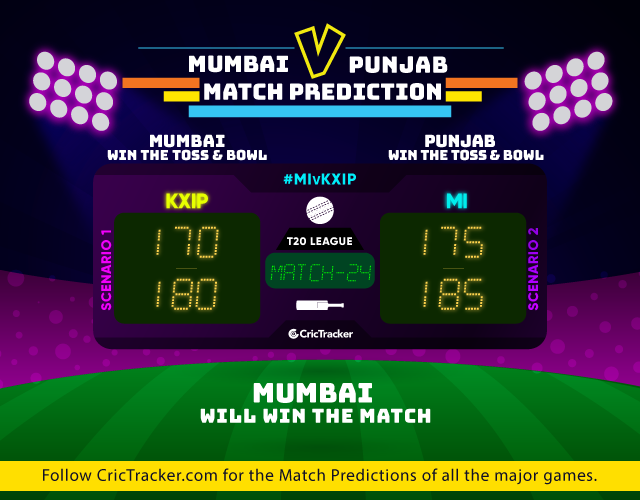