Both the teams have 11 matches each in 22 encounters so far in the tournament.

The 12th edition of the Indian Premier League (IPL) will witness the three-time champions Mumbai Indians (MI) getting their campaign underway at the Wankhede Stadium on Sunday. They will face the challenge from the Delhi Capitals (DC) who ended up at the eighth place in the last season and will be looking to improve their show this time around. Mumbai also failed to qualify for the playoffs and most importantly would be hoping to start well this season.

Delhi have changed a lot compared to the last year including the team name. The former players like Ricky Ponting and Sourav Ganguly are part of their coaching staff. The skipper Shreyas Iyer is in great form as well and has got the likes of Prithvi Shaw and Rishabh Pant with him and the trio is tipped to be the future of Indian cricket. Shikhar Dhawan joining the team this year and bolstered the batting line-up a lot for Delhi.

Even their bowling attack is sorted out, may it be pace or spin, and on the paper at least, the Capitals are looking a team to beat. Having said that, the players have got to click on the field which hasn’t happened for them over the years.

Mumbai Indians have kept their core same from the last year backing the same crop of players. When it comes to starting the tournament well, they are the worst. Last year, they lost four matches up front and despite recovering later, the earlier defeats hurt the team in the end. There were also a few issues with their team combination. But with Rohit Sharma confirming that he will open the innings, the line-up should revolve around him.

Quinton de Kock will open the innings along with the skipper Rohit. Suryakumar Yadav, last year’s opener, has to bat at three for them with Ishan Kishan expected to bt in the middle-order. The trio of Hardik Pandya, Krunal Pandya and Kieron Pollard can be shuffled according to the match situation. Ben Cutting is also a good option to promote if needed. Mayank Markande and McClenaghan and Bumrah are the specialist bowlers with three more bowling options.

Shikhar Dhawan and Prithvi Shaw will open the innings with Colin Ingram, playing the IPL after a long time, batting at number three. The skipper Iyer and Pant will look after finishing the innings in the middle-order. Axar Patel is a decent all-rounder and can handle the innings if there is a top-order collapse. Harshal Patel also can tonk the ball but his primary job is to bowl with Kagiso Rabada and Trent Boult being the other pacers.

Wrist-spinners are crucial in this format and the Capitals have two of them in Amit Mishra and Sandeep Lamichhane who can turn the game on their own. 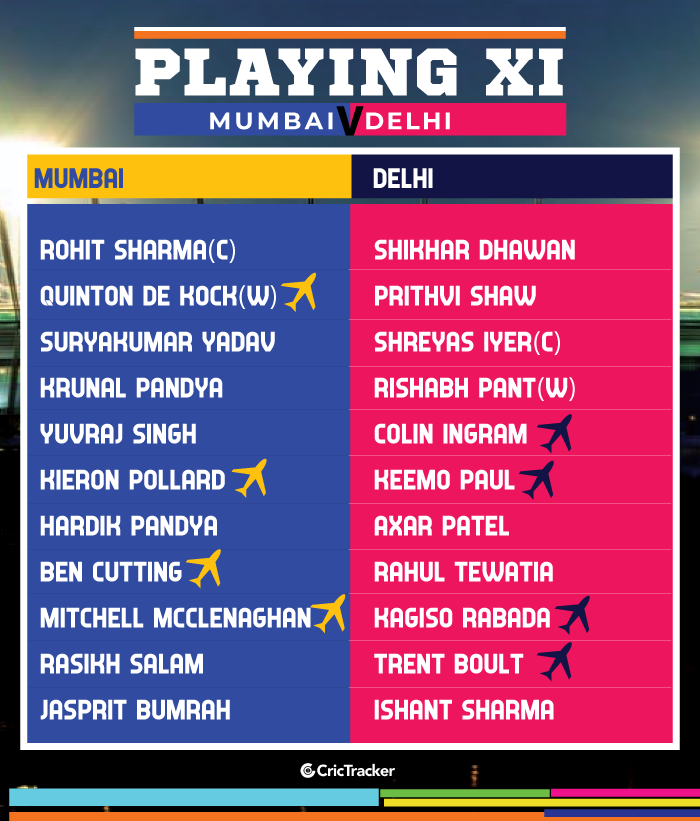 Rohit’s form was a big issue for the three-time champions last year. His batting position was also debated a lot. This time around, he is clear about opening the innings. He is coming into this season with a not so good form in the recent Australia series. A lot will be going on in his mind and the team’s fortunes will also depend on how he fares this season.

Rishabh Pant will have a World Cup spot in his mind. He was the second highest run-getter last season and most importantly, the Capitals will be hoping for him to get going from the world go. Pant, in his groove, is a treat to watch and Mumbai will have to be cautious whenever he comes out to bat.

146 – Amit Mishra needs only four wickets to complete 150 wickets in the IPL.