The Sunrisers Hyderabad (SRH) made hara-kiri of the run chase in their 100th IPL match. They have misread the conditions in Hyderabad and didn’t learn from their previous experiences. Just like in the game against Mumbai, they’ve faltered against the Delhi Capitals (DC) as well causing a further slump. Kagiso Rabada picked up four wickets in this game and was on fire.

Neither David Warner’s fifty nor a three-wicket haul from Khaleel Ahmed saved them in this game. The middle-order was exposed yet again and no one else other than the openers managed to get to double-digits. Keemo Paul and Chris Morris picked up three wickets each in the game as the visitors registered a handsome 39-run win.

The Sunrisers Hyderabad made four changes heading into this game and captain Kane Williamson was back in the eleven. After electing to bat first, the home team made the early inroads by dismissing both the openers early. Khaleel Ahmed, playing his first game of the season, dismissed Shikhar Dhawan and Prithvi Shaw for 7 and 4 runs respectively.

But then, Colin Munro and Shreyas Iyer steadied the ship with a good partnership. The New Zealand cricketer played some exciting cricket before the part-timer Abhishek Sharma got him out. Shreyas Iyer also got out at the wrong time in the 16th over after scoring 45 runs as he tried to play a cheeky shot off the bowling of Bhuvneshwar Kumar.

Rishabh Pant has disappointed for the nth time in a row. The one-handed batting is going to do no good for him as he got out that way after scoring 23 from 19 balls. The Capitals tried to scamper through at the end and got to 155/7 in 20 overs.

Harakiri by the home team in their 100th IPL game

David Warner and Jonny Bairstow, the highly reliable opening pair, took SRH off to a steady start. In the first six overs, they added 40 runs collectively. However, this approach to play slow initially didn’t pay dividends as the pitch got sluggish as the game progressed. Batting became really tough and Bairstow was the first to walk back after scoring 41 runs. Williamson also couldn’t make it big and was dismissed for 3.

Ricky Bhui and David Warner fell in quick successions. While Bhui struggled during his stay in the middle, Warner couldn’t accelerate at the right time. The left-hander got out as soon as he got to his fifty and Vijay Shankar also got out in the same over. Wickets kept tumbling one after another from this stage and the home team could never recover. The side was ultimately bowled out for 116 runs in 18.5 overs after Kagiso Rabada picked his fourth wicket in the game.

Man of the Match: Keemo Paul 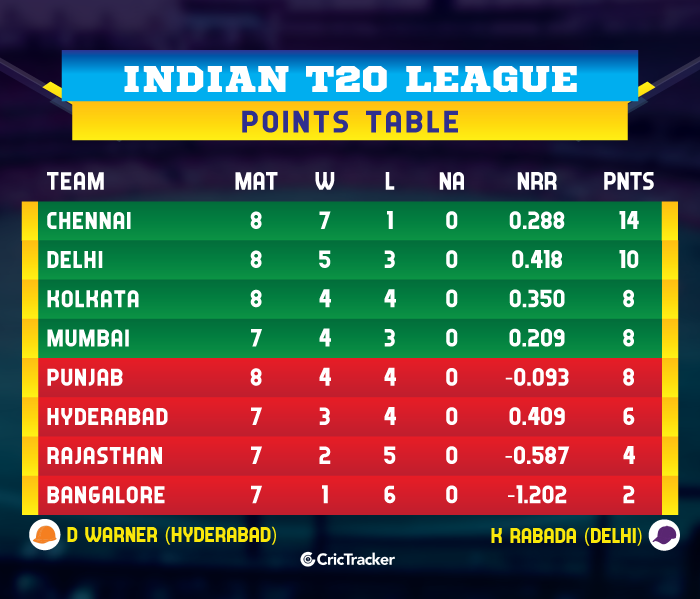