IPL 2019: Match 31, MI vs RCB, Preview - Virat Kohli and his men aim to take down Mumbai at Wankhede

IPL 2019: Match 31, MI vs RCB, Preview – Virat Kohli and his men aim to take down Mumbai at Wankhede

It will be another mouthwatering clash.

They were not perfect in the game against the Kings XI Punjab (KXIP) but still, the Royal Challengers Bangalore (RCB) managed to win their first game of the season. But a lot of things improved. The break might have done wonders for them. Their death bowling with Chris Gayle in the middle was exceptional, to say the least. Mumbai Indians (MI) at the Wankhede stadium are a force but even they will be aware of RCB’s abilities to hunting back strongly.

The last face-off between the two teams was an extremely close affair and S Ravi failing to spot a no-ball off the final ball of the last over had created controversy. Virat Kohli would hope that the umpiring improves in this game and most importantly, his troops put up another decent show to go past the strong Mumbai outfit. There is still time for Dale Steyn to join the team but the Indian bowling attack did extremely well the other day in Mohali.

Mumbai Indians, on the other hand, would be disappointed to have lost the previous game against the Royals. They should’ve gone past the 200-run mark with the way the batsmen had started. But the middle-order blip in the middle overs cost the team. But they are still well placed in the points table and Rohit Sharma should feel confident of his men doing well in this game.

Mumbai has an injury concern in the form of Alzarri Joseph. He injured his shoulder while fielding and looked in extreme pain. It seems unlikely that he will play in this game and Lasith Malinga should replace him. This strengthens the team’s bowling attack even more. The rest of the team should be unchanged.

Pawan Negi wasn’t even required against the KXIP. Instead of him, the RCB team management might play Washington Sundar on Monday at the Wankhede as off-spinner can open the bowling and put pressure on the opposition in the powerplay.

Toss Update: MI won the toss and opted to field 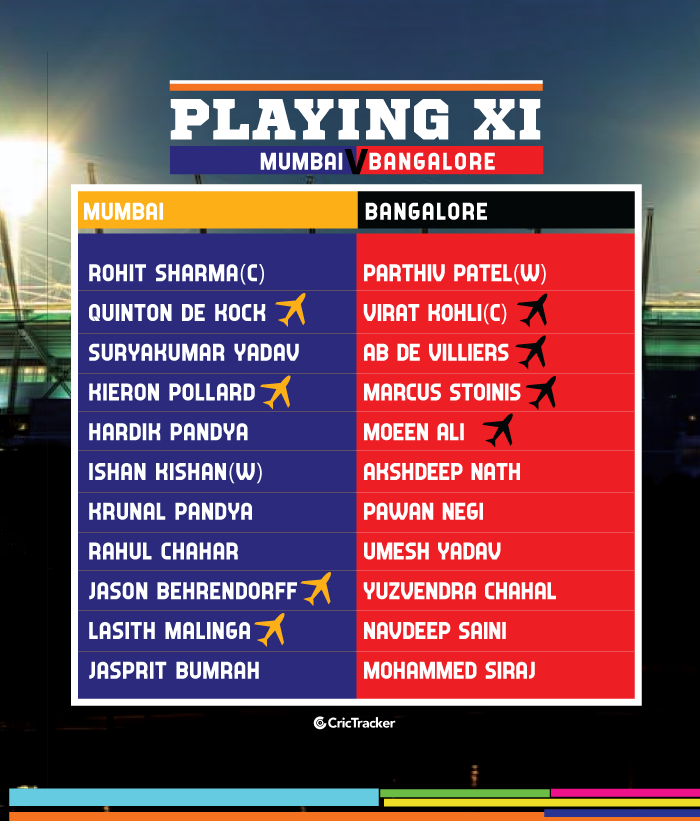 Ishan Kishan is looking completely lost at the moment. He has to bat at the top three or should be dropped. Currently, there seems to be no role defined for him in the middle-order and even he might not be enjoying the role. With De Kock in the side, Kishan is not even donning the gloves behind the stumps. It remains to be seen when does the MI management realises it and shift his batting position.

He is always under the focus. But this time, it will be his responsibility even more and make sure that his team gets over the line in this game. If Virat Kohli and his men manage to beat Mumbai Indians, then RCB might just be unstoppable for the next few games.

5-1 – Mumbai Indians’ win-loss record in the IPL against the Royal Challengers Bangalore since 2013 at the Wankhede Stadium in Mumbai.