With Mujeeb Ur Rahman injured, Sam Curran to make a comeback to the team against whom he picked a hat-trick.

It was an intimidating display by Sam Curran — picked four wickets including a hat-trick — when Kings XI Punjab played Delhi Capitals and helped his side win by 14 runs at home. After that encounter, Capitals registered three wins of five matches while Kings XI had three setbacks of five matches. Both the teams fetched 10 points but Capitals stand a rank higher than Kings XI due to better run rate.

Now, Delhi Capitals seems to be in better shape than the inception of this edition. Before losing to Mumbai Indians in the previous match, they have had three back-to-back wins in their kitty. The return of the Caribbean hero, Chris Gayle and KL Rahul to a good form, Delhi have a need to rack up with solid bowling line up. Was the nightmarish loss still fresh in Capital’s memory? Will they be able to exact revenge of the loss? Well, spectators are deemed to have a good weekend as they can witness one of the best revenge stories of this season.

Delhi will aim to be on course with a win. They were in good form with consecutive wins. Almost they will play with the same team but only one change might be of Sandeep Lamichhane replacing Keemo Paul. It’s a  well-balanced team with good pace attack and a better spin duo.

With Mujeeb Ur Rahman injured, Sam Curran might make a comeback to the playing XI. Kings XI’s middle order is a bit weak on which they have to work. It will be an advantage for the team if bowlers don’t leak a lot of runs in the middle overs.

Toss: Delhi Capitals won the toss and opted to field. 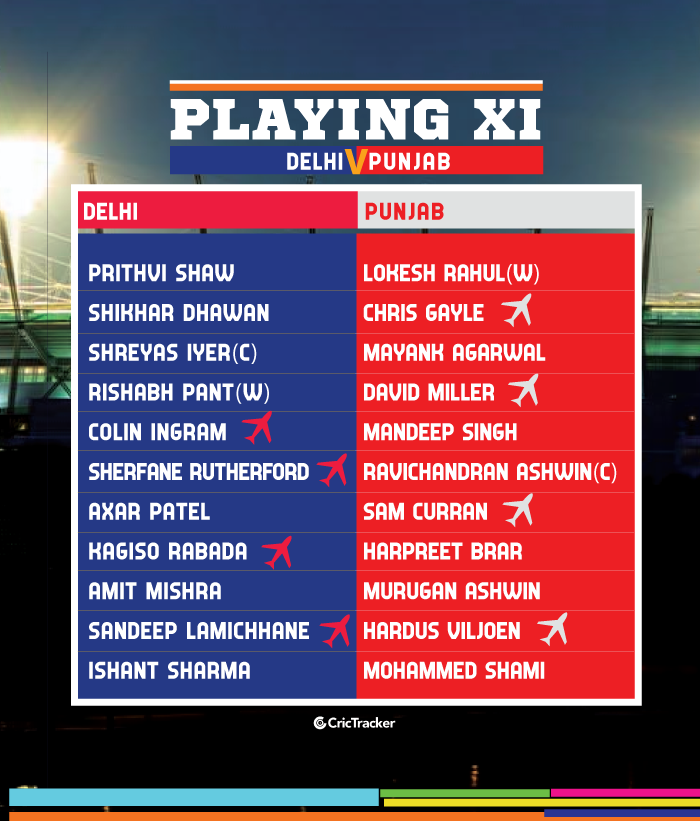 Prithvi Shaw has not very successful this season other than only one innings where he made 99. He has to reap all his skills and muscle up his willow to stay strong on the crease. The role of the colt will be observed closely as the IPL platform can give him experience.

Sam Curran took centre stage when he picked up his first hat-trick and incidentally that was IPL 12’s first as well. He is on the ledge where it is mandatory for him to perform well to be in the team. Can Curran make a good comeback by heaping another misery over Capitals? have to wait and see.