On head to head count at the Kotla, Punjab and Delhi are locked on five victories each from 10 matches.

As far as their overall performance is concerned, the Delhi Capitals (DC) haven’t disappointed. However, yesterday’s massive defeat by 40 runs against the Mumbai Indians (MI) wouldn’t do their confidence a whole lot of good by any means. On a difficult strip to bat at the Feroz Shah Kotla in New Delhi, barring southpaw Shikhar Dhawan, no other batsman couldn’t show resistance and fell like a pack of cards.

Their next encounter is scheduled tomorrow against Ravichandran Ashwin’s Kings XI Punjab (KXIP) in the second of tomorrow’s doubleheader at home itself. Punjab, on the other hand, are in great shape after their victory against the Rajasthan Royals (RR) in Punjab. Victory for either team would push them higher in the points table and most importantly, take them one step closer to a berth in the playoffs.

The pitch at the Kotla started being a decent batting track. However, it has shown the nature of slowing down over the last couple of games. In the last game between DC and MI, the ball kept low on quite a few instances. Teams may look to bat first after winning the toss.

The atmosphere won’t a tough one for the players to deal with. The temperature will be between the 27 and the 30-degree Celsius mark. The humidity should be around the 45 per cent mark. There will be dew, but it’s not expected to impact the game much.

DC may sideline Keemo Paul and bring in Sandeep Lamichhane on the slow and low wicket. The DC will then have three quality spinners- Sandeep, left-armer Axar Patel and leg-spinner Amit Mishra- in their ranks. Ishant Sharma and Kagiso Rabada are the fast bowlers. The home team would also be hoping for their batting unit to step up and deliver after the dismal show against Mumbai.

Mujeeb Ur Rahman hasn’t been in the best of forms and he may make way for all-rounder Sam Curran. Moises Henriques also may come in provided he is fit. The onus would be on Gayle and Rahul to give KXIP a good start. Mayank, Miller, Pooran and Mandeep are the other batsmen. Arshdeep Singh bowled well in the last match and the management is likely to persist with the teenage sensation. 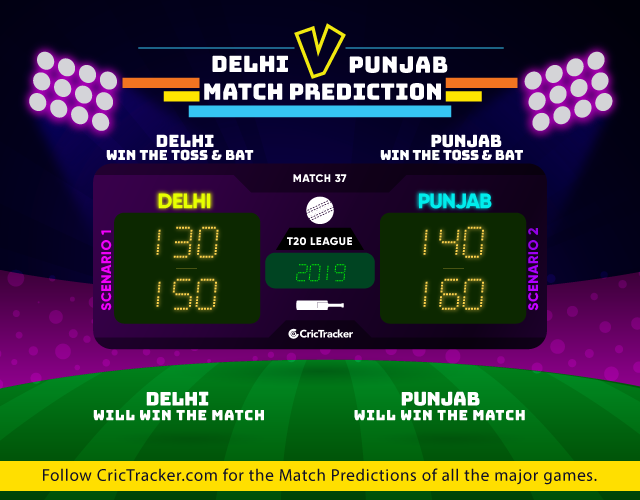