Bairstow and Warner's stand turned out to be too hot to handle for the Knights.

There wasn’t any Dre Russ show on display when the Surnisers took on Kolkata Knight Riders in Hyderabad. It was all about David Warner and Jonny Bairstow who lit up the venue. The duo was brilliant yet again and also brought up the fourth-century partnership this season. All that Hyderabad took was just 15 overs to finish the game and thus have improved upon their net run rate. Khaleel Ahmed was brilliant in the game with a three-wicket haul.

The Knight Riders have now lost five games in a row and every match from here on is a must win for them. Nothing went right for the visitors in this match. With Russell unable to deliver for them, they looked helpless. Also, the catching didn’t help them either. Moreover, SRH has now stormed back into the top four after this victory.

KKR struggle their way through 159 runs

The Knight Riders were unlucky with the toss and were put into bat first. Sunil Narine took the team off to a flyer by scoring 25 runs from only 8 balls. A slower ball from Khaleel Ahmed outfoxed the Caribbean cricketer just as he was looking dangerous. However, the KKR middle order failed once again in the tournament. While Shubman Gill and Nitish Rana scored 3 and 11 runs respectively, Dinesh Karthik was run out after scoring 6.

Rinku Singh came to the rescue when the team was under trouble. He batted sensibly and built up a partnership with Chris Lynn. The left-hander got out after scoring 30 runs from 25 balls. Lynn crawled his way to 51 runs from 47 balls before he was dismissed towards the end of the innings. Andre Russell failed for the first time in the tournament as Bhuvneshwar dismissed him for just 15 runs. KKR fought their way to get to 159 runs in 20 overs.

David-Jonny combo again for the SRH

The ever-reliable David Warner-Jonny Bairstow combo completed the job for SRH in the chase. Together, they registered their fourth hundred partnership this season and played some fierce cricket. After putting on 131 runs as a duo, David Warner was the first to return after he notched 67 from 38 balls. Bairstow, on the other hand, was riding on his luck in this innings.

He was dropped thrice during his stay in the middle. First KC Cariappa dropped an absolute sitter quite early in the innings. Harry Gurney and Piyush Chawla then dropped the English cricketer in quick successions towards the end of the match. Bairstow ensured that the damage was done with an unbeaten 80 off 43 balls. He finished the game for his team with two sixes towards the end. Debutant Yarra Prithviraj was the only wicket-taker for the visitors.

Man of the Match: Khaleel Ahmed 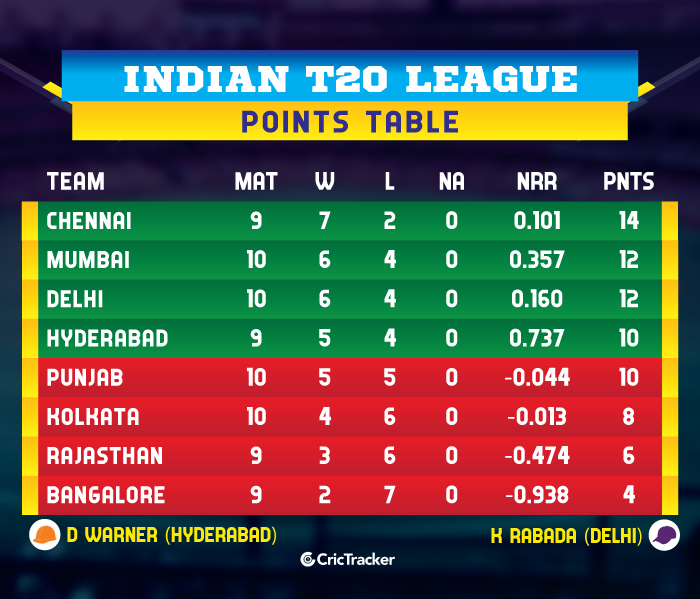