Dhoni might be back in his league for CSK while De Villiers might as well find his regular place in playing XI.

Royal Challengers Bangalore are on the tip of a log almost similar to Jack and Rose in Titanic hung around to save their lives. So, if they have to be in contention for playoffs they need to stay resilient and endure hardships. In a crucial juncture, they are playing southern heavyweights Chennai Super Kings at the Chinnaswamy Stadium. Remember the season opener? Where the Challengers were drubbed by CSK as the latter sealed a comfortable 7 wicket win. Can the aggressive Bangalore side slash the calmness of cool captain’s party?

RCB are in full force after destroying Kolkata Knight Rider on the jubilant Friday night. Knight Riders had to bear the brunt after skipper Virat Kohli and Moeen Ali wreaked havoc with a ton and a half ton respectively. The competition went to the extent of emotional outburst. After Moeen plunged daggers with his bat, Kuldeep Yadav wept like a toddler. Is it only a one match-high or are they off the mark to set off for the long road to securing a playoffs spot? Let’s see if they can continue that momentum against the mighty Men in Yellow.

On the contrary, the Super Kings are wounded soldiers. They are coming fresh from loss to Sunrisers Hyderabad. But, the loss came in the absence of MS Dhoni. The cool captain will be back in place of Sam Billings. The clash is crucial for RCB and for Dhoni’s side as well.

With Dale Steyn back in RCB’s dressing room, the bowling department seems to be settled. Now to give batting section a boost, AB de Villiers will make a come back in place of Klaassen. ABD will take his usual spot of no. 3 bringing down a position for Moeen Ali. With Mohammed Siraj’s form still a concern, there will be a lot dependent on the other pacers.

In the previous match, Dhoni missed an IPL match only for the fourth time. It was because of his back spasm, the skipper decided to rest. If his fitness is cleared, the wicketkeeper-batsman will now come in for Billings and will bat at his usual position. Also, the New Zealand speedster, Scott Kuggeleijn will replace leg-spinner Karn Sharma who played the previous game.

The Super Kings win the toss, elect to field 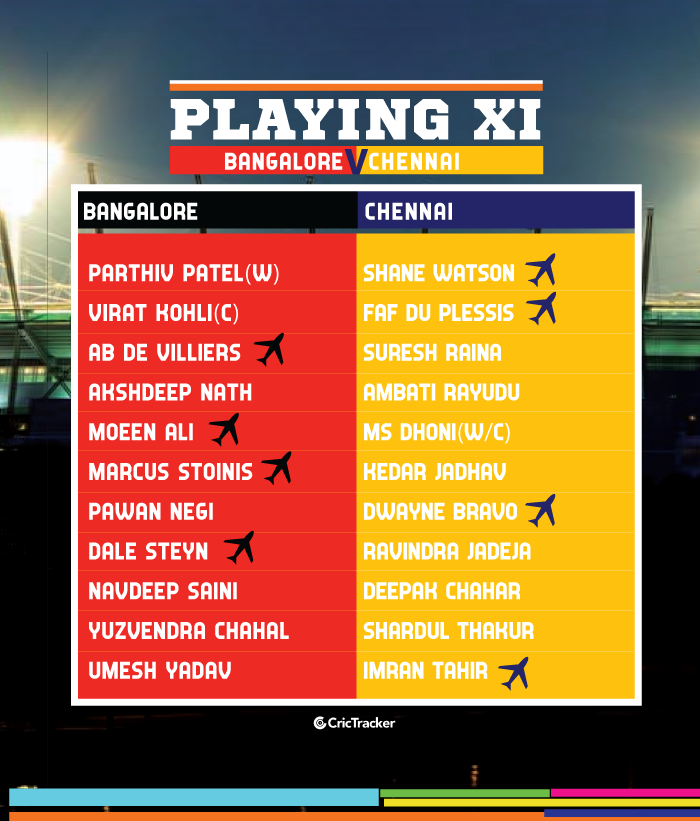 De Villiers was in good form against Mumbai Indians, he scored 75 runs and the team expects a similar show from him against Chennai Super Kings. ABD was rested in the previous match for having a mild concussion after Jasprit Bumrah’s bouncer hit the right-hander’s helmet. But, now after a couple of days, he will be fresh and will aim to make his comeback count for the team in a tough contest.

Men in Yellow needed a pacer who could lead from the front which the team were lacking. Dhoni brought Scott Kuggeleijn in expecting the right-hand pacer to give breakthroughs on the flat track of Bengaluru. So far, New Zealand quick played 2 matches of which he picked two wickets in the same match. Something similar is expected out of him as Deepak Chahar is not always being successful in the death. Scott will be a real deal if he can pick wickets in the death.

15 – Imran Tahir stands 2nd in the most wicket-takers list with 15 wickets in his kitty.