RCB have lost all their last seven matches against CSK and their last win came way back in 2014.

The Royal Challengers Bangalore (RCB) emerged victorious in their erstwhile match against the Kolkata Knight Riders by 10 runs at the Eden Gardens. Virat Kohli’s fifth century in the IPL ensured that the Red Army still remains in the hunt for a berth in the playoffs. The victory would’ve come as a massive breather for them after Nitish Rana and Andre Russell threatened to pull the game off in the death.

They would next be facing the Chennai Super Kings (CSK) at the M Chinnaswamy Stadium in Bangalore in the second of tomorrow’s doubleheader. However, if records are to be considered, RCB lost seven games on the trot against CSK and had last tasted victory in 2014. The Super Kings, on the contrary, would want to bounce back after the defeat against the Sunrisers Hyderabad (SRH).

The pitch at the Chinnaswamy is expected to be a batting paradise and bowlers will have to be on the money, unless they don’t want to get carted around the park.

The atmosphere won’t be on the hotter side with the temperature hovering around the 25 and 28-degree Celsius mark. The humidity will be in the mid-50s. It has been raining in Bangalore in the last few days and there will be dew in the second half, but it may not largely affect the proceedings.

AB de Villiers, who missed the last match due to a concussion, is likely to replace Heinrich Klaasen in the playing eleven. Virat and Parthiv would open with ABD at number three. Moeen Ali, the half-centurion from the previous match will be pushed down a position with Marcus Stoinis next in. Dale Steyn in his comeback IPL game impressed with his wicket-taking abilities.

RCB took three wickets in the powerplay against KKR have scalped three collectively in all powerplays before that. Steyn will partner Navdeep Saini and Mohammed Siraj in the pace department. Chahal is the only specialist spinner with Moeen as the other option.

A call on whether MS Dhoni will play this game or not would be taken in the morning. If he comes in, then Sam Billings will make way having got out for a duck. New Zealand pacer Scott Kuggelejin would come in for leg-spinner Karn Sharma. Shane Watson and Faf du Plessis will open the batting with Raina at three.

The CSK middle-order also needs to deliver for them moving in the business end of the tournament. The CSK would look up to their spin duo of Jadeja and Tahir to choke the runs in the middle overs. 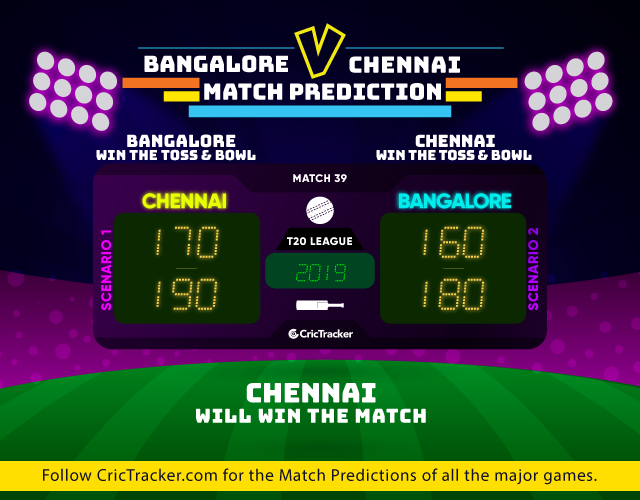