Sawai Mansingh stadium has been the fortress for the Royals over the years but the KXIP have the ability to conquer it.

The last two of the eight teams to start their Indian Premier League (IPL) 2019 season will be the Kings XI Punjab (KXIP) and the Rajasthan Royals (RR). The Sawai Mansingh Stadium in Jaipur will host the game which has been kind of fortress for the Royals over the years. Ajinkya Rahane and Ravi Ashwin, two of India’s ousted players from the limited-overs teams, will lead the two teams this season in the IPL.

The Royals are normally known to up their game considerably in front of their home crowd. They have got their ace batsman Steve Smith back after a one-year hiatus and with the quality overseas players in their squad, the team looks strong. They registered a few memorable victories at the venue and would be looking to start the season on a high this time as well. The Royals are playing in Pink this year and are hoping to make it to the top four once again.

The Kings XI were one of the contenders to win the title last year but they dramatically crashed out thanks to some lacklustre show in the second half of the tournament. Their middle-order was problematic and they’ve worked on it in the auction. Also, the players who were failing in the middle-order have improved a lot over the last 12 months and the franchise will be looking forward to back them.

To start the season, the pitch might be a good one for batting. But there is always something for the fast bowlers in Jaipur with a tinge of green on the surface. The chasing team has won 26 out of 40 matches in the IPL and the side winning the toss will opt to bowl.

The skipper Rahane is the best bet while opening the innings itself and Jos Buttler will assist him. Steve Smith will undoubtedly conquer the number three slot and will look to bat through the innings most of the times. Sanju Samson and Ben Stokes will follow him and then the all-rounders Krishnappa Gowtham and Shreyas Gopal will come. Both are very good batsmen and decent spinners as well.

Jofra Archer, Unadkat, Dhawal Kulkarni and Varun Aaron are the pacers with Stokes also in the ranks. The Royals have seven bowling options in their team but look a bit thin with the bat. Rahul Tripathi might get a look-in in the middle-order at the expense of Aaron in that case.

The undisputed pair of Chris Gayle and Rahul will open the innings for the Kings XI with Agarwal and Nair in the middle-order. Pooran and Mandeep Singh’s inclusion makes their batting line-up look much better than the last year. Varun Chakravarthy and Ravi Ashwin are more than able batsmen and they are the specialist spinners as well. Mujeeb Ur Rahman, Ankit Rajpoot and Andrew Tye are the other bowlers in the team.

The prediction is for the Royals to start their IPL 2019 with a win in their home ground. 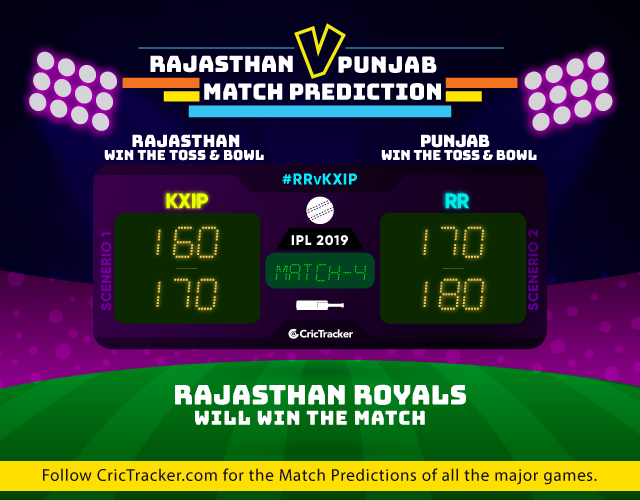