SRH are yet to beat CSK at the Chepauk having played two matches.

The Chennai Super Kings (CSK) lost their last two matches in this edition of the Indian Premier League (IPL), yet are at the top of the points table. And it shows the level of domination they had in their first eight matches. Their next game is against the Sunrisers Hyderabad (SRH) at the MA Chidambaram Stadium and CSK are the favourites, especially for their incredible records at the Chepauk.

Also, MS Dhoni & Co would want to avenge their previous defeat against the Orange Army. The Sunrisers, on the contrary, stuttered with three defeats in the middle, but Kane Williamson’s men came back with a couple of resounding victories. Yesterday, SRH absolutely demolished the Kolkata Knight Riders (KKR) in Hyderabad and would be high on confidence ahead of their clash tomorrow.

The Chepauk is set to host a match after almost two weeks, the last match being against KKR. The track there hasn’t been the best for batting by any means. The ball doesn’t come on to the bat easily and one needs to depend on rotating the strike in order to accumulate the runs apart from getting the boundaries. The spinners will be the one to watch out for in tomorrow’s encounter.

The temperature will be hovering around the 30 and 31-degrees Celsius mark. But it will be hot and humid with the numbers extending to 84 per cent. There will also be a significant amount of dew and the team, batting second may find it easier to score runs.

CSK may bring in Harbhajan Singh for Shardul Thakur, bearing in mind the nature of the strip. Bhajji will have Imran Tahir and Ravindra Jadeja for a company in the spin department. Shane Watson would be keen to get back amongst the runs or might fall off the playing XI. The onus will also be on Du Plessis at the top, Rayudu and Jadhav in the middle order. It goes without saying that Dhoni will again be a key force in the lineup.

SRH need another impact start from David Warner and Jonny Bairstow. Kane Williamson is due for a big score as well. The challenge will also be on the middle-order, consisting of Vijay Shankar, Deepak Hooda and Yusuf Pathan, to perform. On a slow wicket, the roles of Rashid Khan and Shahbaz Nadeem becomes crucial as well. Sandeep, Khaleel and Bhuvneshwar are the fast bowlers. 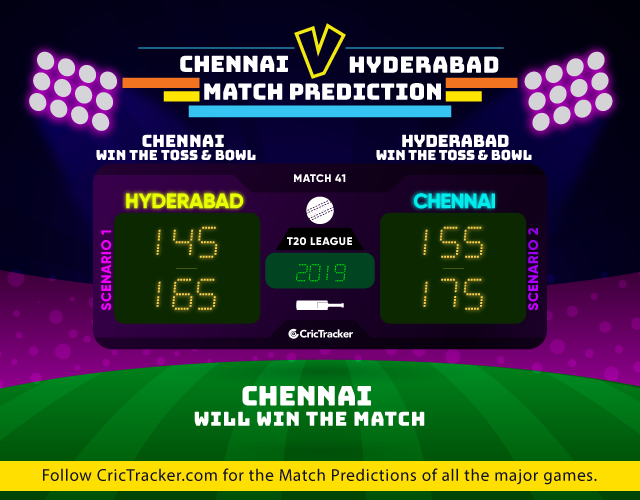