IPL 2019: Match 42, RCB vs KXIP, Preview: Chris Gayle returns to his old den at the Chinnaswamy

IPL 2019: Match 42, RCB vs KXIP, Preview: Chris Gayle returns to his old den at the Chinnaswamy

Both teams are locked on five victories on head to head in Bangalore.

The Royal Challengers Bangalore (RCB) must be hoping that they didn’t start picking up too late in this edition’s Indian Premier League (IPL). After six consecutive defeats, the Virat Kohli-captained franchise has won three out of their last four games. But despite their mini purple-patch, the Challengers are languishing at the bottom of the points table and are in a must-win scenario for every encounter.

A couple of days ago, the RCB survived a massive scare as Chennai Super Kings (CSK) captain MS Dhoni almost pulled a rabbit out of the hat with a knock of 84 not out at the M Chinnaswamy Stadium in Bengaluru. The hosts won the game by one run and it was their first victory over the Super Kings after seven defeats. The RCB are next scheduled to host the Kings XI Punjab (KXIP) tomorrow.

On the head to head count, both teams are neck and neck, and a cracker of a contest can be expected. On the contrary, Punjab are hanging midway in the points table with five wins from 10 games. Ravi Ashwin’s men last slumped to a hefty defeat against the Delhi Capitals (DC) and will find themselves in massive trouble if they go on and lose the all-important encounter in Bangalore.

RCB may bring in left-armer Kulwant Khejroliya in place of Umesh Yadav, who was erratic the other night. He will have Dale Steyn and Navdeep Saini for a company in the fast bowling department. Parthiv Patel will keep opening with Virat Kohli with AB de Villiers at number three. Akshdeep Nath is expected to bat higher up the order with Marcus Stoinis and Moeen Ali to follow. Chahal is the lone spinner.

Punjab may not tinker with their combination. The swashbuckling duo of KL Rahul and Chris Gayle is the opening pair with Mayank Agarwal coming at number three. The onus will be on David Miller in the middle order. There is depth in batting with Hardus Viljoen lower down the order. Hardus will share the fast bowling mantle with Shami and Sam Curran. Murugan and Ravi Ashwin are the spinners. 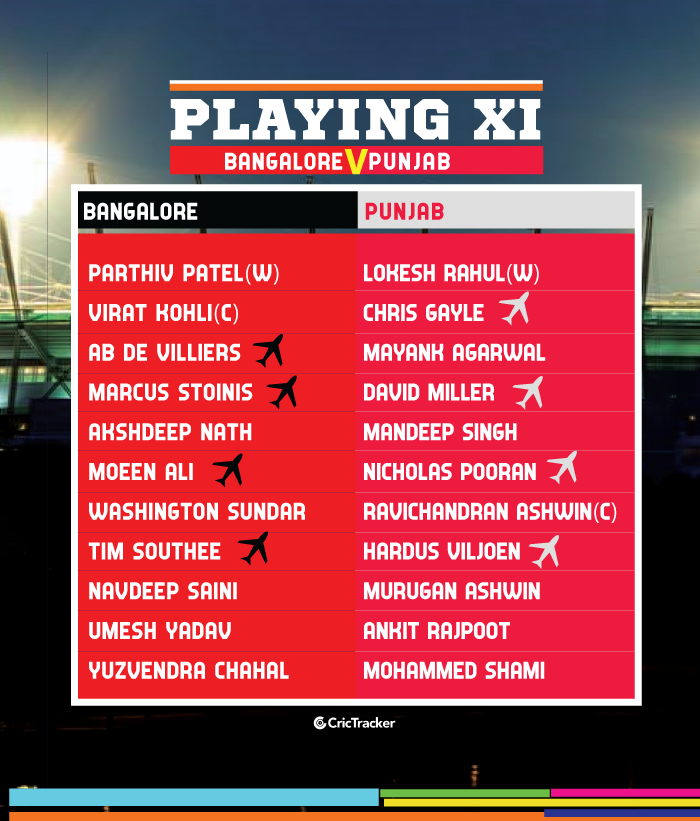 Having scored 387 runs in his last 10 games for RCB at an average of 38.70, Virat is their leading run-scorer this season by a fair distance. However, the 30-year-old has got a couple of single-digit scores in his last three games and that’s not something normal for the Delhi-born cricketer. He would be hoping to get a decent score under his belt, helping his team.

For a number of years, the hulk-like Jamaican plied his trade for the RCB and he would be pretty accustomed of the track at the venue in Bengaluru. Now he will be playing for the Kings and Ashwin’s men will be looking up to the experienced campaigner to come to the party and deliver the goods. On a batting paradise, the Challengers need to get rid of the big fish at the earliest.

26- Wickets Umesh Yadav has picked in the IPL against KXIP in the 17 IPL matches at an average of 18.07. He also has 5 Man of the Match Awards.