IPL 2019: Match 44, CSK vs MI, Review – Rohit Sharma and the bowlers topple the arch-rivals as MI make it a double this season

IPL 2019: Match 44, CSK vs MI, Review – Rohit Sharma and the bowlers topple the arch-rivals as MI make it a double this season

The Mumbai bowlers relied on three variations this match – slow, slower and slowest.

The Chennai Super Kings (CSK) were without three of their best players in the highly anticipated game against the Mumbai Indians (MI). The troika of MS Dhoni, Ravindra Jadeja and Faf du Plessis, who form the crux of the team weren’t available for this massive encounter. Hence the hosts looked extremely fragile as Rohit Sharma and his men completed the double this season.

The visitors’ skipper led his team from the front with a wonderful knock of 67 runs. On a slow batting surface, the Mumbai bowlers relished the challenge and were too good for the opposition. Without MS Dhoni, CSK looked like a transformer without the power supply. The Super Kings lost their first home game this season as the Mumbai Indians have now risen up to the second spot on the points table.

The Mumbai Indians, who were put into bat first, made a few changes to their eleven. Evin Lewis replaced Ben Cutting while Anukul Roy came in for Mayank Markande. The form of Rohit Sharma has been a concern for the three-time champions right through this season. He’s been getting good starts but has failed to convert those into substantial scores. However, he turned things around in this encounter.

Even though he lost his partner Quinton de Kock for just 15 runs, he kept going strong. Lewis played an uncharacteristically slow knock and scored 32 runs. Meanwhile, Rohit Sharma registered his first fifty of the tournament. He was going good but threw his wicket away after he scored 67 runs. The Mumbai Indians didn’t really get the acceleration through the middle overs. But a 17-run final over bowled by DJ Bravo helped them get to 155/4 in 20 overs.

Chennai batting falters in the absence of MS Dhoni

Shane Watson seemed to have carried from exactly where he left off in the last game. He smashed two fours in the first over and looked good. But he played a nothing shot and got out for 8. The Australian hit a ball bowled down the leg side straight to the man at 45°.  Batting against the new ball seemed tough as it was stopping on the pitch. Hardik Pandya, who bowled the fourth over, struck off the first ball he bowled. Suresh Raina played a poor shot straight into the air which was easily pouched.

Ambati Rayudu was also dismissed for a duck as Krunal Pandya went through the gate and got him bowled. Kedar Jadhav and Dhruv Shorey also failed and got out cheaply. Murali Vijay looked good with his 38 but couldn’t make it big. The Chennai batsmen kept falling one after another and it all looked hapless in the absence of MS Dhoni. Even though Mitchell Santner and DJ Bravo tried their level best, it wasn’t sufficient as the hosts were bowled out for just 109 runs and lost the match by 46 runs.

Man of the Match: Rohit Sharma 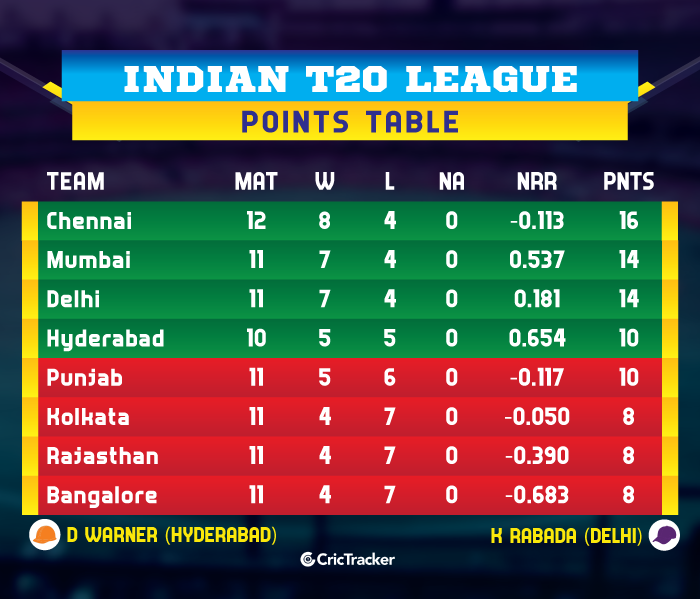