Watson narrowly missed out on his century but had enough damage by then to ensure his team won.

One of the newest rivalries in the IPL, the CSK-SRH battle, was played at the Chepauk in Chennai on Tuesday. Like it promised to be this was an interesting contest this time as well. Two players who have struggled throughout, Manish Pandey and Shane Watson, found their form back and played terrific knocks. However, it is the latter’s knock that has prevailed.

Watson repeated the exact same heroics as he did in the final of IPL 2018. He had a troubled time initially, started off with a maiden in the first over. But picked up pace as the innings progressed and decimated the Sunrisers’ bowlers. MS Dhoni and CSK’s gamble of persisting with him paid off at last. The Australian seemed to be on autopilot mode.

It never seemed as if he struggled all this while and also surpassed the 8,000-run mark in T20 cricket. However, he was unfortunate not to have got to his hundred as he was dismissed for 96. The Chennai Super Kings haven’t lost a single game at home this season and also have reclaimed the top position on the points table.

Manish Pandey plays a terrific knock on his comeback

Bhuvneshwar Kumar, the stand-in skipper of SRH, lost the toss and his side was put into bat first. In his final game in IPL 2019, Hyderabad’s prolific run-getter Jonny Bairstow bagged a second ball duck. Harbhajan Singh bowled a delivery that didn’t turn much and that ended up outfoxing the English cricketer. Interestingly, it was Manish Pandey who was sent in at three to bat alongside David Warner.

Considering the current form, Pandey was expected to be the second fiddle to the former skipper and spend some time out in the middle. However, he came out with a completely different intent. It is a rarity that his partner tends to dominate Warner. But, the Karnataka cricketer was exceptional. He played the innings with complete freedom and got off the mark with a boundary.

In the last two years, he has never played a better knock for the Sunrisers. Warner got sucked out by the humidity in Chennai and perished after scoring 57 off 45 balls. Pandey, though, stayed in the middle right till the end. He was assisted by Vijay Shankar who scored a breezy 20-ball 26. At the end of 20 overs, Manish Pandey was unbeaten on 83 off 49 balls as SRH finished with 175/3.

The CSK engine started off slowly in the chase but caught up within no time. Even though Faf du Plessis was run out for 1 run early in the innings, Shane Watson and Suresh Raina made the most of the powerplay. At the end of the first 3 overs, they were 8/1. But by the end of 6 overs, they finished with an excellent total of 49/1. Raina played with great intent and all the risks he took paid off. This is one of his best knocks this season where he scored 38 runs off 24 balls.

The left-hander hit six fours and one six during his knock before Rashid Khan’s googly deceived him completely. Bairstow affected an easy stumping to send the batsman back to the pavilion. However, Shane Watson kept asserting his dominance from one end. He, in particular, targetted Sandeep Sharma and Rashid Khan and shredded them into pieces.

But, he failed to get to the triple digits as Bhuvneshwar dismissed him on 96 when the team was 16 runs shy of a win. Jonny Bairstow plucked a beautiful catch to prevent him from getting to a century. Even though there was slight tension towards the end, Kedar Jadhav played well and finished the game for his team.

Man of the Match: Shane Watson 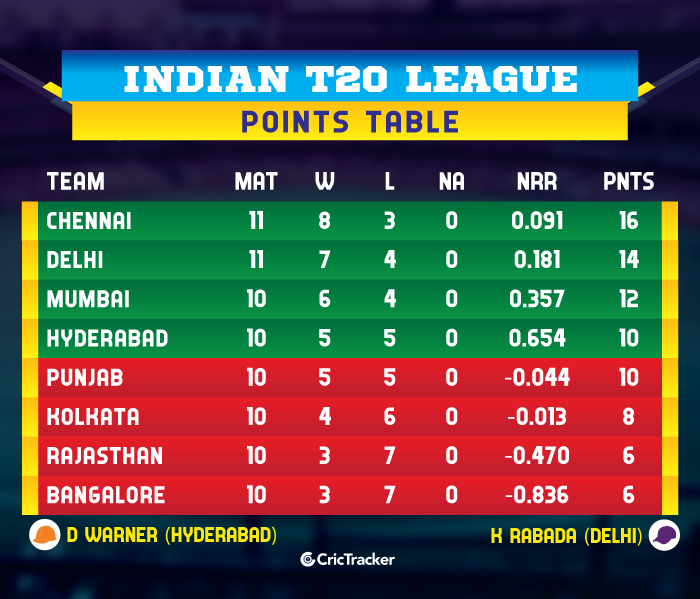