Focus will be on continuing the winning momentum for both the teams.

The promotions of the ongoing Indian Premier League (IPL) started with Rishabh Pant warning MS Dhoni. In response, the former India captain also accepts the challenge. The time has come for the youngster to walk the talk now and the way he played against the Mumbai Indians (MI) the other day are the danger signs for the Chennai Super Kings (CSK).

The Delhi Capitals (DC) thumped MI in their own den by a formidable margin and will be eyeing to take down another heavyweight team in their second game. The side looks well balanced this time around and the bowling also stood up to the task of restricting the opposition at the Wankhede stadium. Having said that Keemo Paul batting at number six is a concern for them and they might need a proper batsman at that slot.

CSK led by MS Dhoni played on a treacherous pitch in the season opener which was criticised a lot by many. Dhoni himself felt that they will have to prepare better surfaces going forward in the tournament. The Kotla track will no doubt be better and they will be definitely tested by the brilliant home side. It will be interesting to see if the experienced hands will be able to get the better of a relatively young team.

Winning the first game of the season is very important and the Delhi Capitals have done it. There might be no changes to the team after such a start. Though Keemo Paul batting at six is a concern and they might ponder about adding a proper batsman in the top six. Also, Rahul Tewatia didn’t have much role to play apart from taking four catches in the field and Amit Mishra is likely to replace him.

MS Dhoni is not known to make many changes to the line-up irrespective of the result. Though he indicated in the post-match presentation that they have told certain players when they will play. Also, the fourth overseas player might get added in this game and he might be Faf du Plessis. He could bat in the top four depending on the situation and is likely to replace Shardul Thakur who didn’t bowl in the first game. 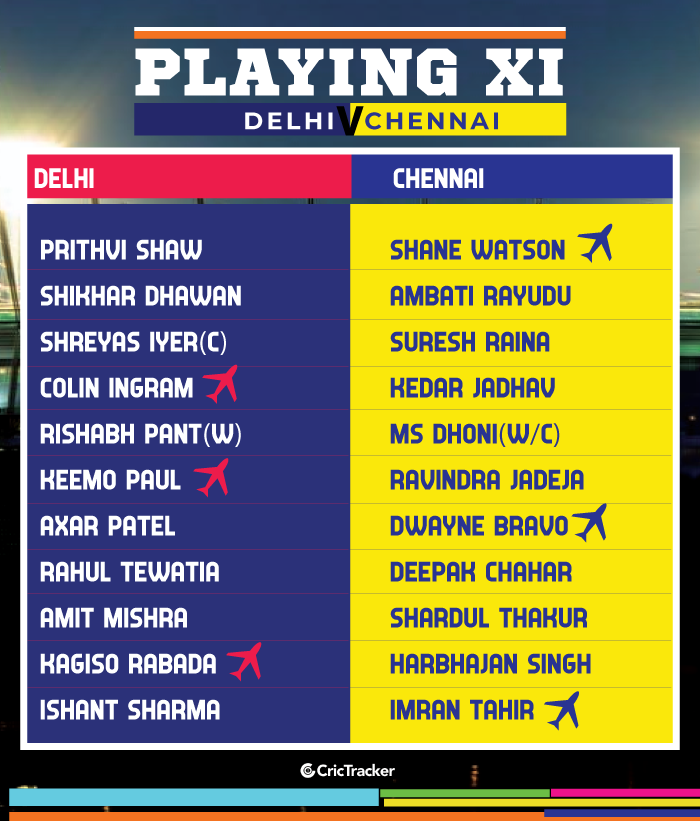 Prithvi Shaw was undone by the angle of the left-arm pacer in the previous match. A lot is expected of him at the top of the order and with the experienced Dhawan by his side, Shaw will be looking to make amends in this encounter. He struggled a bit with his form in the Syed Mushtaq Ali trophy and will be wary of not getting bogged down. It will be interesting to see how he approaches this match.

Ravindra Jadeja will be eager to show his all-round skills this season. He was given an opportunity to finish the game in the last outing. His credentials as the bowler were never doubted but Jadeja, the batsman, has come under the scanner at the highest level. If he puts up an improved show in this tournament, the selectors might think of Jadeja seriously while picking the World Cup squad.

15.41 – Imran Tahir’s bowling average in the shortest format at the Feroz Shah Kotla in Delhi. He has picked 17 wickets in 11 T20s at the venue.

118 – Shikhar Dhawan has scored 118 runs in the IPL against Harbhajan Singh; the 2nd most by any player against the off-spinner in the league.

Here’s all you need to know for this game: