Controversies seem to be following Ravichandran Ashwin and KXIP everywhere.

Kings XI Punjab’s (KXIP) second match of IPL 2019 against the Kolkata Knight Riders (KKR) was again surrounded by a few controversial moments. However, the result didn’t go in favour of the team from Punjab this time around. KKR registered a massive victory at the Eden Gardens and thus improved their net run rate by a fair margin.

Andre Russell, Nitish Rana and Robbie Uthappa – the ‘RRR’ troika, played some terrific cricket in the game to hand over the Knights with a 28-run victory. Kings XI Punjab toiled hard to get as close as possible to the target. However, they couldn’t get anywhere near and lost their first game of this season.

Andre Russell smacks the bowlers all around the park

After winning the toss, Ravichandran Ashwin opted to bowl first as Eden Garden is quite a good venue for chasing. But KKR, playing at their home venue, put up a huge total on the board. The side lost the wicket of Chris Lynn quite early. Sunil Narine smashed 24 runs off Varun Chakravarthy’s first over in the IPL. The left-hander was dismissed soon after that by another debutant, Hardus Viljoen.

Robbie Uthappa and Nitish Rana joined hands at this stage and put up a wonderful partnership together. They added 110 runs together as Rana played the aggressor. He continued exactly from where he left off against the Sunrisers. With three fours and seven sixes in his innings, the 25-year-old amassed 63 runs in just 34 balls. After Varun Chakravarthy dismissed him, it was Andre Russell who walked into the middle.

The Jamaican was cleaned up by Mohammed Shami when he was on 3. However, KXIP just had three fielders in the ring when this ball was bowled and thus it was declared a no-ball. Russell went berserk after this and made most of the opportunity. He scored 48 runs off just 17 balls before he was dismissed in the last over. Uthappa played the anchor in the innings and was unbeaten on 67 as KKR finished with a mammoth 218 runs on the board.

In the chase, KXIP was jolted by the loss of KL Rahul early for just one run. After keeping the visitors briefly interested, Chris Gayle also fell victim to Andre Russell. He scored 20 runs off 13 balls before he failed to clear the in-field and got out. Sarfaraz Khan, who made quite an impact in the last match also failed in this game. He crawled his way to run-a-ball 13 before Russell got the better of him.

Mayank Agarwal, David Miller built up a good partnership in between. It seemed they were going strong and subjected the hosts to slight pressure. However, the asking rate kept creeping up at regular intervals. Mayank Agarwal played beautifully and scored 58 runs off 34 balls. But the required rate got over his nerve and he was cleaned up by Piyush Chawla as he attempted to slog one over the deep mid-wicket fielder.

Miller and Mandeep Singh hit some quick runs towards the end but the required run rate was already out of their reach by then. In the end, on what was a very good batting surface, KXIP could only get to 190 runs for the loss of 4 wickets and lost the match by 28 runs. 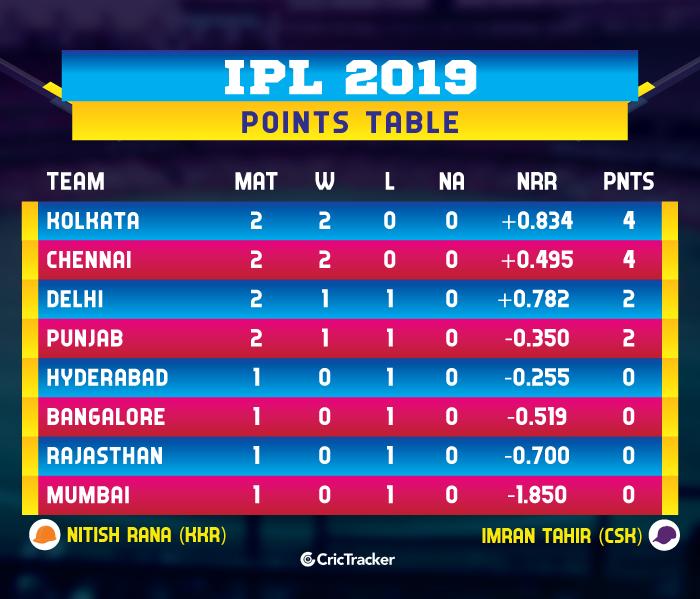