IPL 2019: Match 52, KXIP vs KKR, Preview - Battle of survival to decide who stays and who doesn't

IPL 2019: Match 52, KXIP vs KKR, Preview – Battle of survival to decide who stays and who doesn’t

The Knight Riders broke their 6-match losing streak with a powerful performance against Mumbai and need to continue winning.

Although Kings XI Punjab and Kolkata Knight Riders will have no confirmation with regards to a place in the playoffs if they register a win today, but to remain hopeful, there is no other choice but to win. Both these teams can amass a maximum of 14 points and if the Sunrisers Hyderabad defeat the Mumbai Indians, both these sides will have a tougher road.

Punjab are coming here on the back of a humiliating defeat at the hands of Sunrisers. They were outclassed with the bat, ball and on the field as well. Their net run rate took a herculean blow and their rivals Sunrisers are currently a country mile ahead if it all things pans down to the net run rate. They have a lot of catching up to do and this perhaps is the perfect time for them to play on home turf.

The Knight Riders broke their 6-match losing streak with a powerful performance. Although Hardik Pandya‘s brilliance almost took Mumbai home, posting 232 on the board batting first wins you games 99 out of 100 times. This perhaps is the best way for them to get back in good form and maybe, a couple more wins will help them get closer to the playoffs.

KL Rahul and Gayle are getting the runs, but they haven’t been very successful at converting them into match-winning knocks. Nicholas Pooran has shown some glimpses of his Caribbean flair whilst David Miller is still struggling. Murugan Ashwin and Ravi Ashwin had a good outing against Hyderabad despite the team conceding 212 runs. No changes are expected in their bowling ranks barring the inclusion of Sam Curran in place of Mujeeb Ur Rahman.

Lynn and Shubman Gill have found unique chemistry with each other which no captain would want to disturb. Although Uthappa was dropped for his lacklustre 20-ball 9, he is back in the side and will be sharing the middle order responsibility with Dinesh Karthik and Nitish Rana. Andre Russell is “The Man” to watch out for as usual in their XI. Sandeep Warrier is expected to get a game as the Kerala speedster might replace the underperforming Prasidh Krishna.

Toss Update: KKR won the toss and opted to field 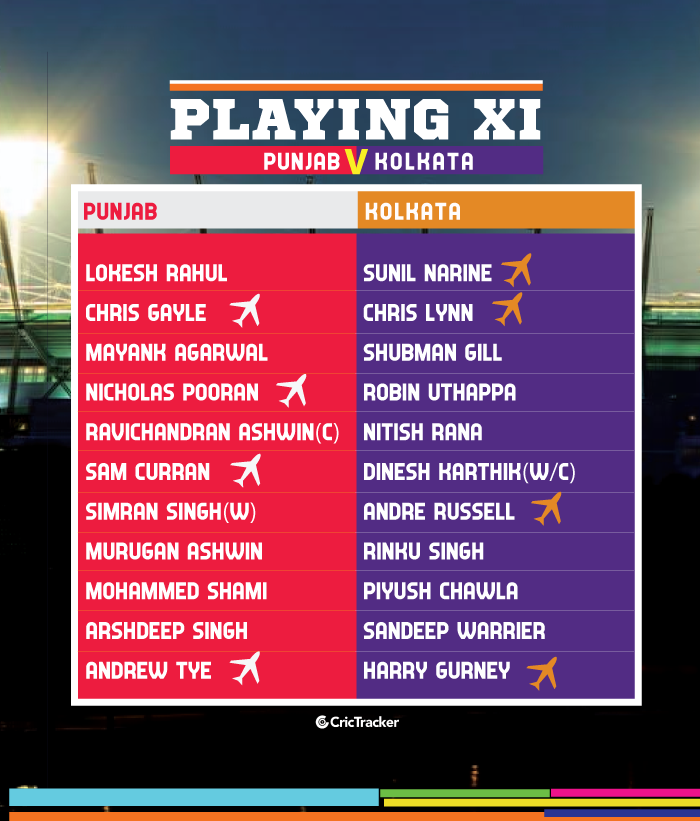 The only player in the Kings XI ranks right now who is getting runs consistently is KL Rahul. He has been in prolific touch and is second on the list of most run-scorers. He has played some fabulous match-winning knocks in Mohali this season, this game will be a tough nut to crack. If he and Gayle can get them off to a good start, only then Punjab can truly dream of a place in the knockouts.

In a couple of opportunities given by the management to open the innings, Shubman Gill showed the fraternity why he is so highly rated. He missed out on a well-deserved hundred in the game against MI, but it won’t take long for him to get a hundred if he keeps going this way. Gill seems to have extra time to face every ball, which in many ways embodies the class-act he is.

14 – Andre Russell needs 14 runs to complete 500 runs in an IPL season for the first time, he’s third on the Orange Cap list.