The Royals have a 3-4 head to head record against DC at the Kotla.

The Delhi Capitals (DC) had a massive stutter against the Chennai Super Kings (CSK) by 80 runs at the Chepauk. The Shreyas Iyer-led team was bowled out for just 99 and is currently placed third on the points table. Most importantly, after being at the top of the table, DC now face the danger of not finishing in the top two. They are next scheduled to face the Rajasthan Royals (RR) at the Feroz Shah Kotla in Delhi.

Their Net Run Rate (NRR) also took a hammering and they will end up playing the Eliminator if they don’t win their last round-robin match. The Royals, on the other hand, after their rain-abandoned game against the Royal Challengers Bangalore (RCB) have a slim chance of making the cut. However, apart from winning they also have to take care of their NRR which is currently at -0.321.

The pitch has shown different signs this season. But in the last few games, the batsmen have scored runs. The track for tomorrow’s game is expected to be batting-friendly as the previous afternoon game between DC and RCB saw runs flow at a fair clip. It won’t be a surprise if both the teams pack their eleven with spinners yet again at the Kotla.

It will be hot and humid with the temperature starting at 41 degrees Celsius at 4 pm match-time. It will gradually come down and by the time the contest ends, it will be 35 degrees Celsius. The conditions won’t be humid though with the numbers way below the 20 per cent mark.

The Capitals may bring in Ishant Sharma in place of Chris Morris, who has conceded runs at nearly 10 rpo in all of his last three games, though he got two wickets. The powerplay will be crucial and the onus will be on Shaw and Dhawan to utilize it. Trent Boult didn’t have a great comeback, having conceded 37 against CSK, but he’ll get another chance. Suchith also retains his place after his decent show.

The Royals may want to strengthen their batting and bring in Manan Vohra in place of Mahipal Lomror. Bearing in mind, the nature of the strip, Krishnappa Gowtham may come in place of Stuart Binny. Ashton Turner is the best possible option RR have as Steve Smith’s replacement. Smith’s departure also means that the Royals’ captaincy will be changed again and Rahane is the most likely candidate for the same.

Dhawan couldn’t get the big scores at the start of the tournament. However, he has shown incredible consistency and has been one of the very reasons why the Capitals are sitting comfortably on the points table. In his last four games, the southpaw scored three half-centuries. In his last three games at the Kotla, Dhawan notched 35, 56 and 50 and DC will be hoping for another good knock from his blade.

Gopal has arguably been RR’s standout bowler in this IPL. Not only has he picked up wickets, but also restricted the batters from scoring runs against him. The tweaker’s confidence would’ve skyrocketed after his hat-trick in the game against RCB on a batting paradise at the Chinnaswamy. The Kotla pitch will be on the slower side and Gopal is expected to be a tough nut to crack.

The prediction is for the Capitals to win the match. 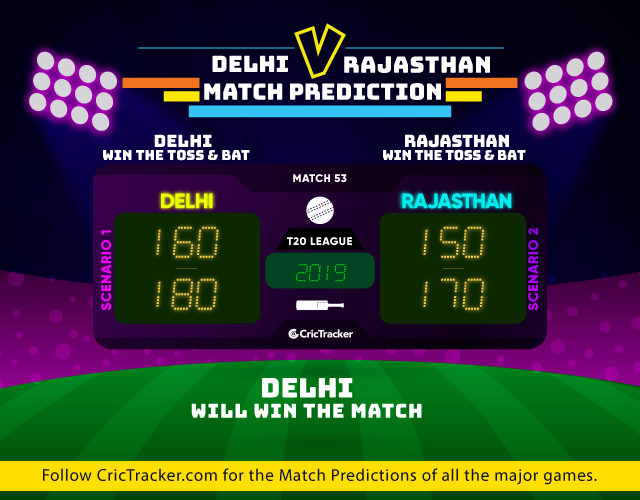