Both the teams have won their respective opening fixtures.

The Kings XI Punjab (KXIP) will play their second consecutive away game in the ongoing Indian Premier League (IPL) on Wednesday. The Kolkata Knight Riders (KKR) will host them at the iconic Eden Gardens. Both the sides won their opening fixtures which were high-scoring. While the KKR were helped by Andre Russell’s blitzkrieg in the last four overs against the SRH, the KXIP’s skipper infamously ‘mankaded’ Jos Buttler to pave the victory for his side in Jaipur.

The Knight Riders looked out of ideas in front of David Warner in their opening fixture. They will have to deal with Chris Gayle’s brute force in this game who is looking dangerous. Moreover, Sunil Narine’s injury has put the team in a spot in terms of an opener and though Nitish Rana has fit into that role very quickly, the team will definitely miss a bowler in this match. It will be interesting to see who will replace him in the playing XI.

The Kings XI doesn’t have any such issues after a rather controversial start to their season. Nevertheless, they are already on the board and would be eager to win another away encounter. Moreover, David Miller joining has boosted their batting. He missed the first game due to the international commitment back home in the T20I series against Sri Lanka and should walk back into the playing XI.

The Eden Gardens surface is always known to favour the batsmen. The first game was a testament to it and with the dew coming in heavily at the venue, it goes without saying that the team winning the toss should opt to chase. There are slight chances of rain in the lead up to the match. But that shouldn’t worry the organisers much. The heavens won’t open up during the game and the temperature will hover around 25-27 Degrees Celsius.

The KKR are hit with Narine’s injury and it is uncertain as of now if he will play. If he is unfit, then Joe Denly might come into the mix and the England cricketer might also open. He can also bat in the middle-order with Rana doing well at the top of the order against the SRH. The rest of the line-up should be the same as they don’t believe in tinkering with the team much. Having said that, the bowlers should better this time around.

The KXIP camp has got a massive boost with David Miller joining the team and it is likely that he will replace Nicholas Pooran in the middle-order. Pooran kept wickets against the Royals and couldn’t do much with the bat as well. Miller is in great form and will be hard for the management to bench him. KL Rahul will take up the wicketkeeping job it seems and also open the innings like he did last season.

The prediction is for the toss to play an important role and the chasing team to win the game. 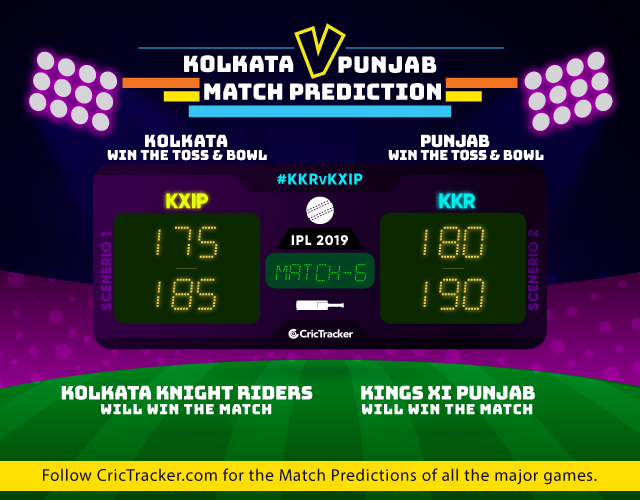