IPL 2019: Match 9, KXIP vs MI, Preview – Momentum with Rohit Sharma & Co. ahead of the clash against Punjab

IPL 2019: Match 9, KXIP vs MI, Preview – Momentum with Rohit Sharma & Co. ahead of the clash against Punjab

The Kings XI need to get their act together to go past the team like MI.

Kings XI Punjab (KXIP) and Mumbai Indians (MI) will lock horns in the ninth match of the ongoing Indian Premier League (IPL) on Saturday. It will be the first game of the doubleheader weekend and will be played in the scorching heat in Mohali. While the visitors are coming off a victory over the RCB amidst the no-ball controversy, the KXIP were blown away by the Andre Russell blitz at the Eden Gardens.

Ravi Ashwin-led Punjab side made four changes to the line-up after the first game despite winning the game and that raised many eyebrows. The decision to leave out Ankit Rajpoot was also baffling even as Mujeeb Ur Rahman also had to miss out. Nevertheless, the team will be looking to make amends for a poor show. Playing in front of the home crowd will also give them much-needed confidence.

Mumbai Indians, on the other hand, looked a perfect team against the RCB. Very early, they have managed to find their perfect XI. Though a few would argue that Kieron Pollard should be dropped, the team management backs him to the hilt and the T20 veteran is hitting the ball well only to not get his innings going. Even the punt on sending Yuvraj Singh at four has worked wonders albeit only temporarily. The team will be hoping more from the superstar in the coming games.

The KXIP made four changes after the first game and that was more to accommodate David Miller and Andrew Tye into the playing XI. Also, the team looked balanced though one felt they missed a bowler like Ankit Rajpoot in their ranks. Expect the fast bowler to make a comeback at the expense of the rookie Varun Chakravarthy who was found wanting against the Knight Riders. The rest of the team should be the same for the hosts.

Mumbai Indians will be delighted that they have found a perfect combination so early into the tournament. The deadly combo of Jasprit Bumrah and Lasith Malinga is back and they have the ability to give nightmare to any opposition. Unless there are last minute injuries, they don’t seem to be making any changes to the side which means, the likes of Ishan Kishan and others will have to warm the bench for a few more matches. 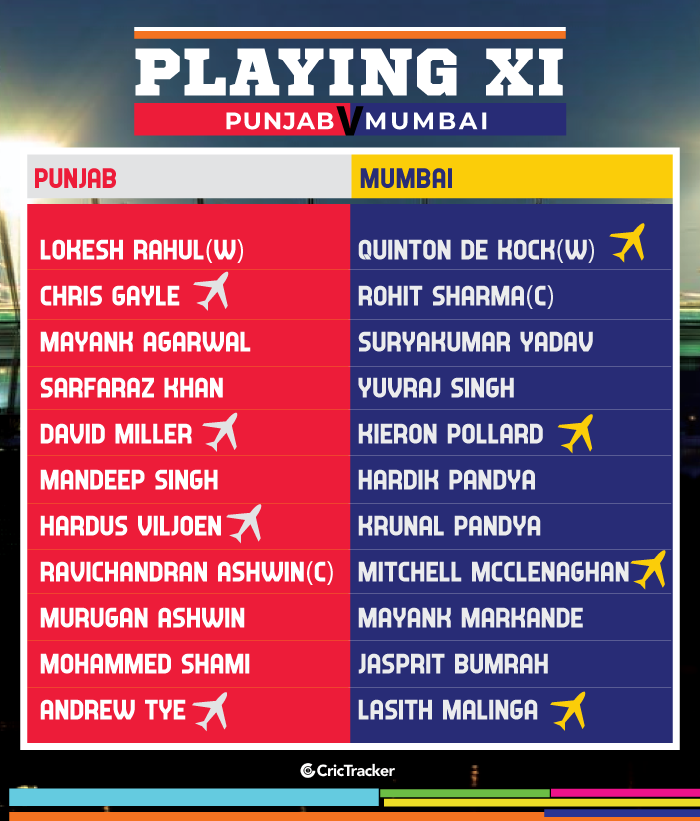 KL Rahul coming back to the Indian team last year was due to his purple patch in the IPL. But in the same tournament, KXIP’s wicketkeeper-batsman is not coming to terms. So far in the two matches, his stint in the middle has been very short and the franchise will be hoping for him to find his groove as soon as possible. The team will need him against the team like Mumbai and Rahul will be keen on proving his worth.

Suryakumar Yadav’s contribution in the last game went unnoticed. His 24-ball 38 helped the team not lose the momentum in the middle overs. He has adapted well to the number three slot and looks a longterm prospect for Mumbai in that position. One has to credit Surya for giving away his opening slot which he owned last season for his captain Rohit Sharma. It will not be a surprise if he returns to the top of the order later in the tournament if things don’t go as planned for the three-time champions.

4 – Mumbai Indians won all the four matches they played at the PCA Stadium in Mohali since the start of 2012.

40 – Both Kings XI openers Chris Gayle and KL Rahul have an average of 40+ in the IPL against the Mumbai Indians.