Here we look at the players whom Mumbai Indians could buy at the auction.

Starting the 2018 season as the defending champions, Mumbai Indians failed to find consistency despite having a squad with all bases covered. However, injuries to a couple of key overseas pacers and inconsistency of their batsmen saw the team getting knocked out from the league stage. Ahead of the 2019 edition, MI have an ideal chance to fill in the gaps in the squad at the Player Auction.

The Rohit Sharma-led franchise has already roped in Quinton de Kock through trade with RCB who gives them the stability at the top and assurance behind the wickets. They have released as many as ten players including the replacements ahead of the next season. With INR 11.15 crore in their purse, Mumbai Indians have a chance of buying as many as seven players at the auction and only one of them can be an overseas recruit.

Here we look at the players that Mumbai Indians could buy at the auction:

MI can target only one big buy with 11.15 crores in the bag and seven slots left to fill. The big names on their table could be in form of Shivam Dube, Shimron Hetmyer and Jaydev Unadkat. However, Mumbai could end up placing their bet on Dube as the other two could easily cross the 6-crore mark. MI have the ability to spend up to five crores for getting their local all-rounder.

They can also pursue Sherfane Rutherford as they already have some valuable overseas stars in their line-up and don’t specifically need to go after Hetmyer at the auction. Rutherford has exhibited his hard-hitting skills in all the leagues he featured in the last one year. Mumbai are also expected to go after a couple of uncapped pacers instead of Unadkat who was invited to their trails.

The left-arm pacer Chama Milind has a great record with the ball in the T20 format but has hardly made a significant development with respect to IPL over the years. The franchise also showed special interest in a 17-year-old pacer from Jammu and Kashmir named Rasikh Salam Dar. The two pacers are expected to gain bids from the franchise. The team is expected to complete their squad with the likes of Sarafraz Khan, Jalaj Saxena and Tajinder Dhillon who was with them last season as well.

Here are the expected players MI would bid on in the IPL 2019 auction: 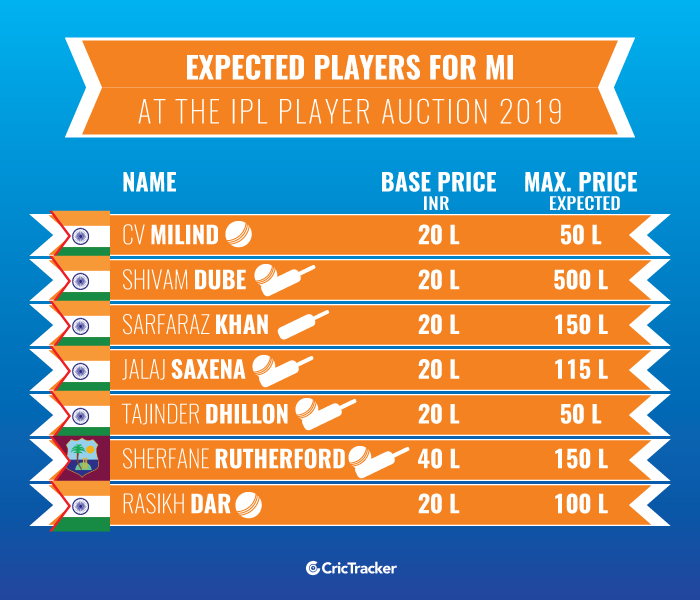