The Sunrisers Hyderabad will feature in as many as three matches during this round.

The 5th round of the Indian Premier League (IPL) official championship fantasy league was jolted by the availability of the players. AB de Villiers missed the game against the Kolkata Knight Riders due to concussion while Jos Buttler returned home after playing only one of the three matches of Rajasthan Royals in this round. The coming 6th round too could be decided based on the availability of the players as England stars are set to return home on April 26th.

Here is our fantasy guide for the 6th round of the IPL Fantasy League season mode:

Round 6 schedule – Sunrisers Hyderabad will play three matches while Delhi Capitals plays only one game. All the remaining six teams will play two matches apiece.

KL Rahul and MS Dhoni seem to be ideal choices among keepers with Jonny Bairstow not going play more than one match in this round and Jos Buttler already left for England. Quinton de Kock has games against CSK in Chennai and against KKR in Kolkata. The left-hander’s success against the spin dominant teams looks bleak. Rishabh Pant has only one game this round while Parthiv Patel can be given a shot due to his price tag.

With three Sunrisers matches in the coming round, picking David Warner is a no-brainer. Virat Kohli has been brilliant every odd game while AB de Villiers has been on a consistent side. Nitish Rana is trying hard to improve his 2nd half scores and his price tag is useful too. Opening the batting and keeping wickets makes Sanju Samson a crucial picking for this round as Rajasthan aim to stay alive in the competition.

There are few other big names in the form of Shikhar Dhawan, Faf du Plessis, Shreyas Iyer and Rohit Sharma. However, these miss out due to their batting position, form and their availability of this round. Dhawan and Iyer have only one game to play while Rohit and Faf have struggled for big scores. Mayank Agarwal can be an economical pick.

Andre Russell and Hardik Pandya continue to be consistent in this category and can hardly be overlooked. Rajasthan’s Riyan Parag could well be the pick of this round due to his price tag of 7 credits. The 17-year-old could be batting up the order and bowling 3-4 overs.

Given the Super Kings return to Chennai, the South African leg-spinner Imran Tahir will be crucial given his success here this season. The leg-spinners in the form of Rahul Chahar and Shreyas Gopal were rewarded for their good bowling in the previous round. Khaleel Ahmed has been amongst wickets and could be top performing bowler alongside Rashid Khan during the 6th round with extra match in hand. 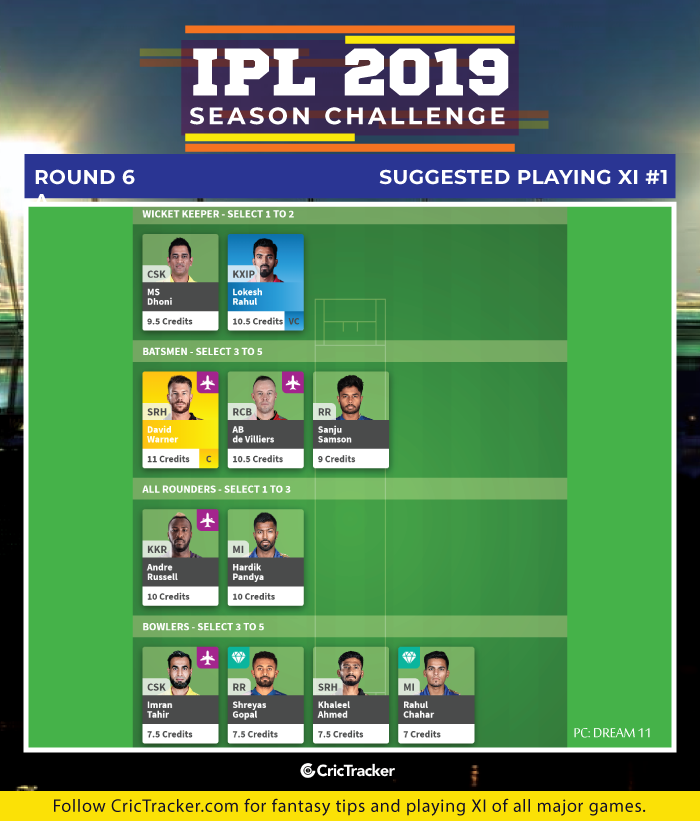 David Warner has to be a must as captain or at least vice-captain given the Sunrisers going to play three games this round. The likes of KL Rahul, AB de Villiers, Andre Russell and Hardik Pandya are next in the preferred list for the multiplier options. Khaleel and Rashid can be risky options as vice-captains.

The game between RCB and KXIP in Bangalore on Wednesday and the Sunday night game in Kolkata between KKR and MI will be ideal for the Free Hits. Both the matches are expected to be high scoring matches given due to the batting line-ups and the tracks. (The Free Hit booster multiplies the fantasy points in a game by two times. This is currently available only on official fantasy site.) 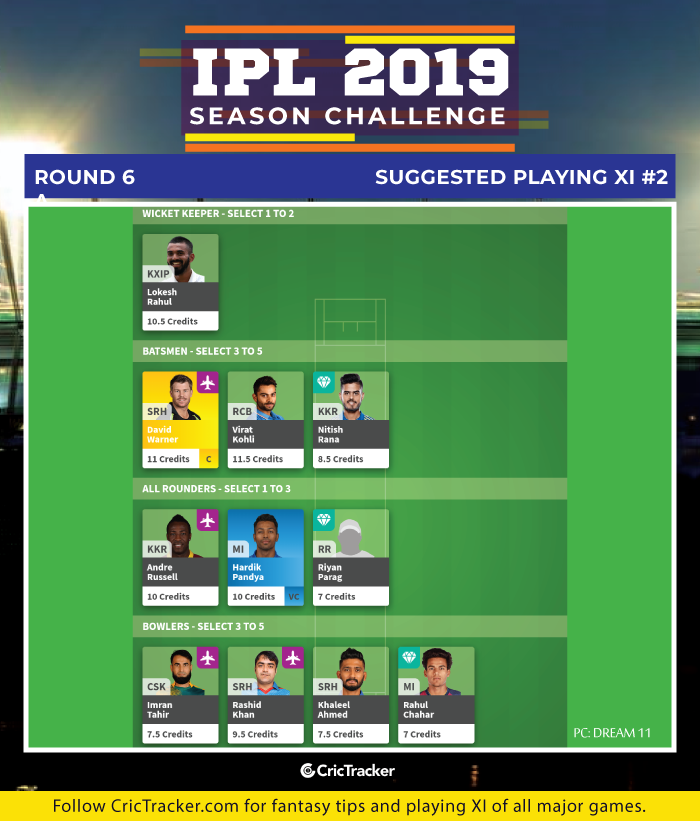