Sunrisers Hyderabad will start as favourites due to their winning form during the second half.

Sunrisers Hyderabad will be up against Royal Challengers Bangalore on Friday as they aim to inch closer to reach yet another IPL final. Both the teams have got some of the top class International players on whom they are relying to win. David Warner’s recent form has strengthened the Sunrisers who were ordinary with the bat until the last week. The Bangalore franchise will be looking to improve their performance having won only two matches in the second half of the league phase.

AB de Villiers batting at the death for too long is probably the only thing that could stop the Sunrisers Hyderabad getting into the 2nd qualifier. De Villiers has got some impressive numbers at the death in the last 3-4 IPL seasons. Though the sample size is small, his record against spin during this period isn’t that convincing. ABD had his share of struggles while facing spinners in IPL 2020 and bowling them at the death against the South African could be a ploy.

With two spinners in form of Rashid Khan and Shahbaz Nadeem in their line-up, the Sunrisers could well save an over or two for the death against De Villiers if he stays for longer at the crease. In general, the likes of Sandeep Sharma and Jason Holder account for 2-3 overs during the death. Since the start of 2017, De Villiers has smashed Sandeep for 30 runs in just ten balls at the death and his history against Holder is a well-known one. 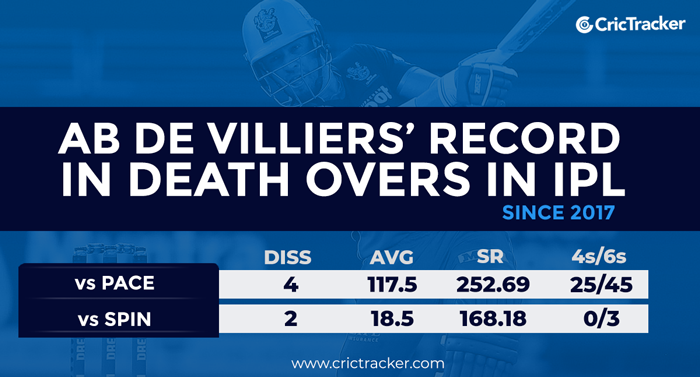 Will Kohli able to change his intent against spin?

Virat Kohli has been quite defensive while facing spin bowlers in IPL 2020 as he averages 110 but at a strike rate of only 108.91. Virat managed to hit just 13 boundaries in over 200 balls against spin this season. Though Kohli averages only 30 against pacers in IPL 2020, he has managed to strike at 135.59 but his percentage of boundary balls is only 11.86. With at least 5-6 overs of spin is likely to be bowled by SRH between 7th and 15th over, it will be a big challenge for the RCB skipper to find boundaries which he has failed to do regularly this season. 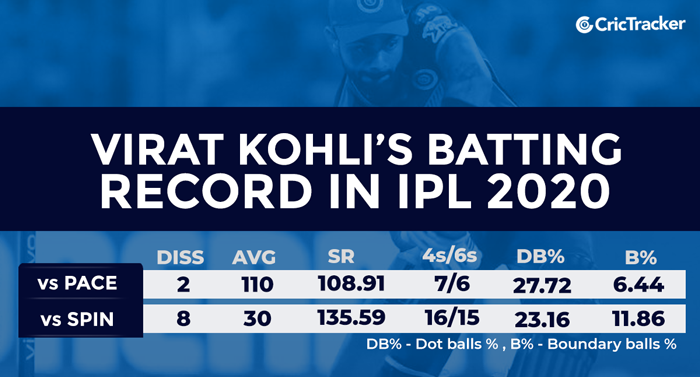 Rashid’s dominance during the middle: 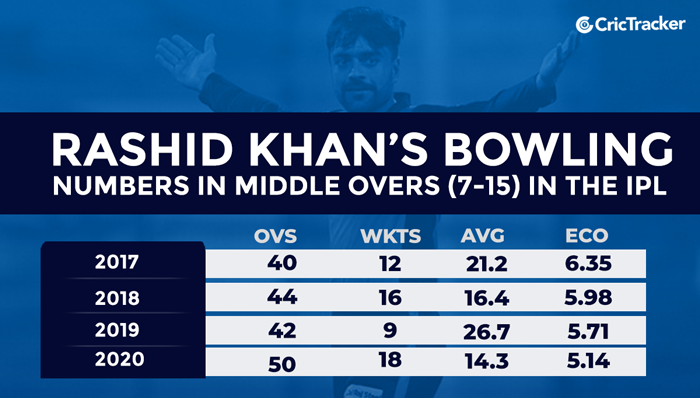