Jason Holder and Kane Williamson were the star performers on Friday for the Sunrisers.

Sunrisers Hyderabad got their 4th consecutive win and their 5th victory in last six matches as they now head into the 2nd qualifier. A clinical performance in the Eliminator by Sunrisers extended the trophy wait of Royal Challengers Bangalore who came up with yet another below-par performance with the bat. Kane Williamson showed his class in a must-win game with an unbeaten 44-ball 50. The defeat during SRH vs RCB was the 5th successive loss for the RCB team and all those five defeats came while defending a total.

Williamson was named player of the match but falls behind in Match Impact due to all-round performances. One such was produced by his own teammate and batting partner, Jason Holder. The West Indian started the SRH vs RCB by dismissing Virat Kohli and Devdutt Padikkal, the top run-getters of RCB in this season. Holder also got the wicket of Shivam Dube to finish with analyses of 4-0-25-3. He later wrapped up the game with help of back to back fours as he scored an unbeaten 24 off 20 balls while batting with Kane. 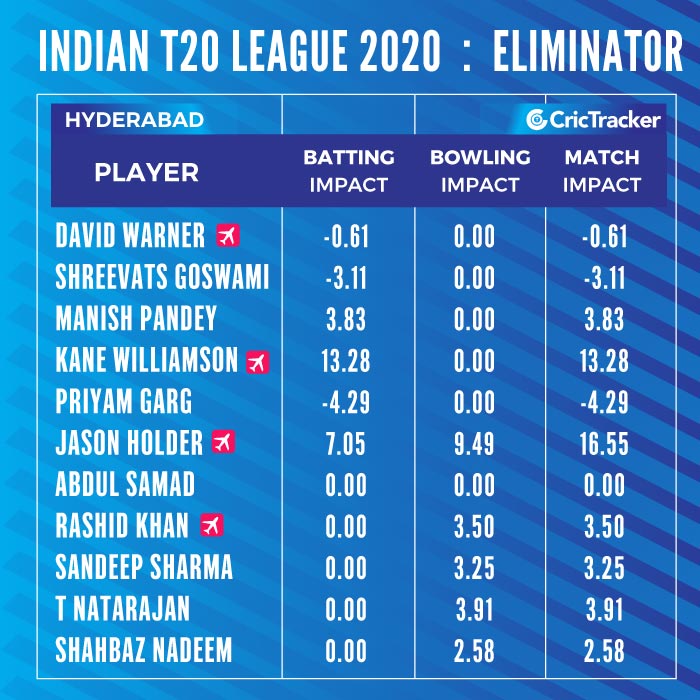 Jason Holder earned Match Impact of +16.55 as per CricTracker’s Match Impact Ratings including +9.49 with the ball which is the highest bowling impact during SRH vs RCB. AB de Villiers comes next in terms of match impact during SRH vs RCB as the keeper-batsman did not hit a six but finished with a fifty scored at 130 strike rate. If not for De Villiers, the Bangalore franchise might not have reached the 100-run mark. ABD’s 56-run knock earned the highest batting impact of +15.81 and was the only one head of Williamson’s 13.28.

Mohammed Siraj had the 3rd best match impact rating of SRH vs RCB as the RCB pacer dismissed the Sunrisers Hyderabad openers in the powerplay and conceded only 28 runs in his four overs. Earlier with the bat, Siraj scored ten from seven balls without which RCB didn’t get close to 130. The Hyderabad-born earn an impact of +13.44 but finished on the losing side only. Adam Zampa played a key role in taking the game down the wire as he finished with bowling figures of 4-0-12-1 without conceding a boundary only to earn a bowling impact of +8.58. 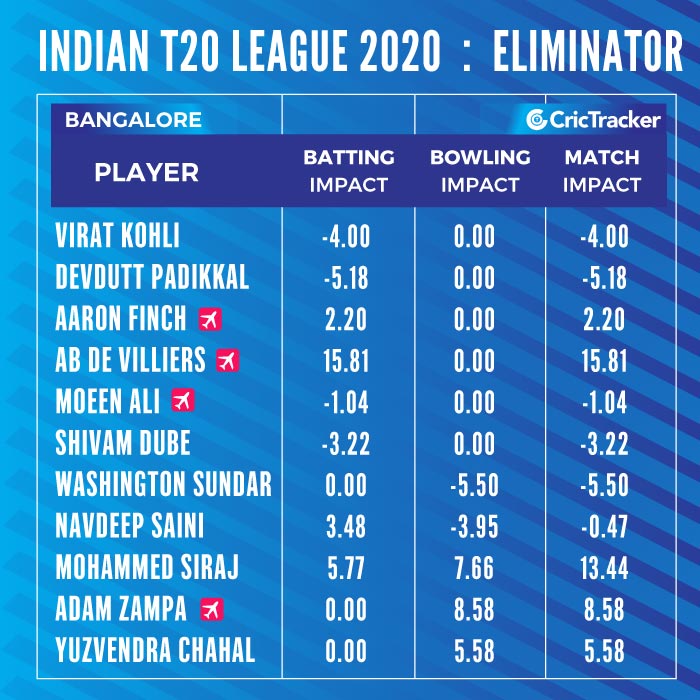