Trent Boult and Rohit Sharma turned out to be the top performers for MI during the final.

Mumbai Indians crowned as the Indian Premier League (IPL) winners yet again as they were successful in defending their title by thumping the Delhi Capitals in the finale. A collective bowling performance led by Trent Boult kept Delhi down to 156/7 despite two half-centuries. Later, it was the MI skipper Rohit Sharma who stepped up to the occasion by scoring 68 runs. His knock was backed by contributions at the other end resulting in Mumbai completing the chase in only 18.4 overs for the loss of five wickets.

Rohit Sharma put his struggles with the bat aside and led the team from the front on the big day. Rohit showed his intentions from the very first over smashing Ravi Ashwin for a six who dismissed him in the qualifier for a duck. Rohit eventually got out after the required run rate came under six but had scored 68 from only 51 balls by then and was involved in three 45+ partnerships. The MI skipper thus earned a batting impact of +9.01 which was in fact the 3rd highest match impact during MI vs DC as per CricTracker’s Match Impact Ratings. 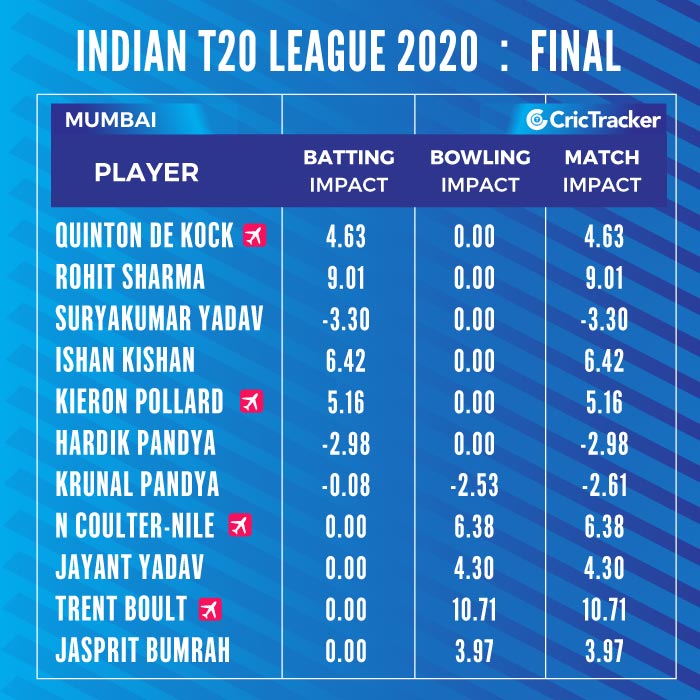 The highest was recorded by Rishabh Pant, interestingly, the player in the losing team during MI vs DC. The keeper-batsman walked to bat when Delhi Capitals were struggling at 22/3 in the powerplay. He then smashed 56 from only 38 balls while putting on a 96-run stand for the 4th wicket with his skipper Shreyas Iyer. Pant’s knock earned a batting impact of +12.36 which was almost three times that of Iyer (+4.94) who scored nine runs more than Pant. However, Iyer failed to get going after a quick start as he finished with an unbeaten 65 off 50 balls.

Ishan Kishan and Quinton de Kock were the top run-getters for Mumbai Indians through the tournament and did earn an impact of +6.42 and +4.63 respectively with the bat. The man of the match was Trent Boult who claimed a 3-wicket haul which included two powerplay wickets. The left-arm pacer got the better of last match hero Marcus Stoinis on the very first ball. Trent Boult earned the highest match impact rating for the Mumbai Indians during the MI vs DC as his bowling efforts got him +10.71 impact rating. 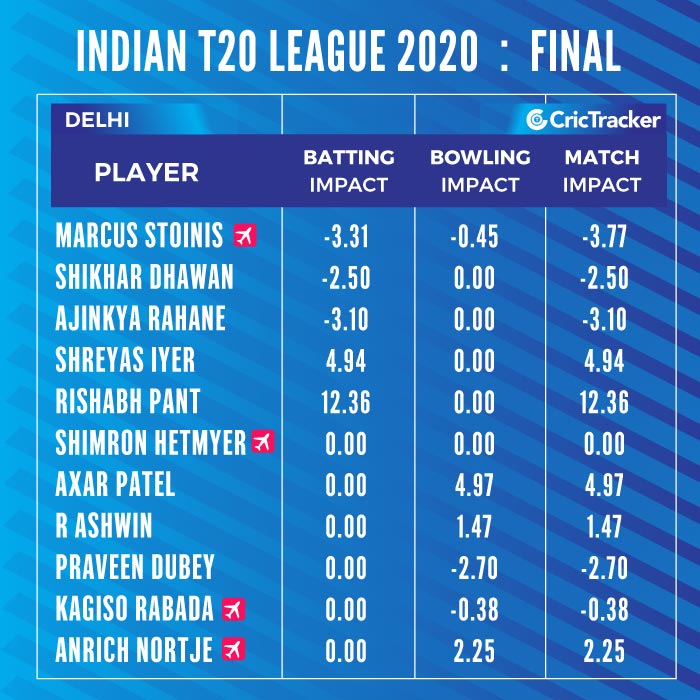